The Ambassador of the Republic of Poland visited KEK 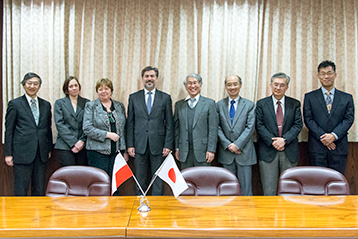 From the left : Dr. Nomura (Executive Director), Dr. Lagoda (T2K Group), Dr. Rondio (T2K Group), H.E.Kozaczewski (the Ambassador of the Republic of Poland), Prof. Suzuki (Director General), Dr. Toge (Executive Director), Prof. Yamauchi (Director of IPNS), Prof. Kobayashi (IPNS) On 2015/01/30 (Fri.), H.E.Cyryl Kozaczewski, the Ambassador of the Republic of Poland, visited KEK, where Polish scientists have worked for many years on the Belle/Belle II and T2K experiments. T2K and Belle II are the only two international experiments in Japan and are quite unique in that respect. Prof. Suzuki, Director General, gave an overview of KEK and its physics goals. Prof. Yamauchi, Director of IPNS, took him on a tour around the Belle II experimental facility, the SuperKEKB accelerator facility, and the Photon Factory. He then had a discussion with Polish researchers working on the Belle II and T2K experiments. They talked about how large experiments are organized, about education, and life in Japan. 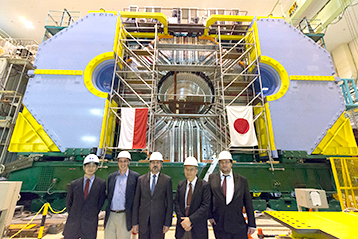 In front of the Belle II detector in the Tsukuba experimental hall. 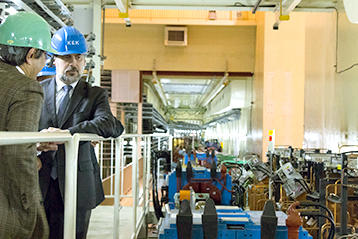 Inside the tunnel at the Fuji experimental hall. Prof. Furuya explains the SuperKEKB accelerator. 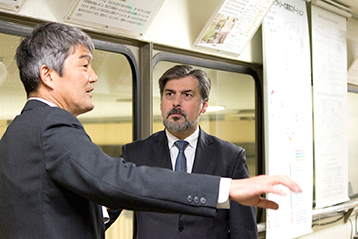 At the Photon Factory. Prof. Kawata explains the X-ray beamlines. 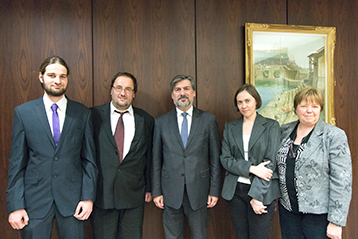 With Polish researchers working on the Belle II and T2K experiments.

Brief introduction to the experiments

The Belle II Experiment at KEK

Belle II is an electron - positron collider experiment at the Tsukuba campus of KEK. The electrons and positrons are accelerated nearly to the speed of light and then collided. These collisions create large numbers of particles called B mesons, which contain bottom quarks, as well as anti-particles called anti-B mesons, which contain anti-bottom quarks. Since this facility produces many B and anti-B mesons, we call it a "B-factory".

The earlier experiment called "the Belle experiment" finished in 2010. This experiment measured the difference in properties of B and anti-B mesons, and verified the Kobayashi-Maskawa theory, which describes CP violation using a 6 quark model. The Belle II experiment aims for much higher performance by upgrading both the accelerator and the detector. It aims to find "New Physics", which cannot be explained by the Standard Model of Particle Physcis.

The Belle II experiment is a large international collaboration with over 600 researchers from 23 countries. The Polish group originally joined the Belle experiment. They made important contributions to the development of the critical inner-most tracking detector called the "Silicon Vertex Detector (SVD)", which measures the decay point of B mesons precisely. They also made significant contributions to Belle data analysis. Now they work on the SVD for the Belle II experiment.

T2K is a long-baseline neutrino oscillation experiment on the Tokai campus of &lt;KEK. They make large numbers of neutrinos using the J-PARC accelerator and aim the beam at the Super-Kamiokande detector (in Gifu), which is 295 km away. As the neutrino beam travels from Tokai to Gifu, some neutrinos of one type may change into another type. This mysterious phenomenom is called "neutrino oscillation".

The T2K experiment is also a large international collaboration with over 500 researchers from 11 countries. The Polish group woked on construction of a muon detector for ND280 (the near detector) called the "Side Muon Range Detector (SMRD)" and contributed to the NA61 experiment at the CERN SPS to better understand uncertainties in neutrino beam production.