Construction of Synchrotron Radiation Research Institute was recommended by the Science Council of Japan in 1974. It was a groundbreaking concept to use the electromagnetic waves from the electron synchrotron for research in all material sciences. Unlike conventional joint-use laboratories, it is an interdisciplinary multi-purpose laboratory that can be used by researchers in a wide range of scientific fields. This idea was realized as a facility in the National Laboratory for High Energy Physics (KEK) in 1978. It is called “Photon Factory”. Construction of the building began at the same time, followed by the construction of the accelerators, beamlines, and experimental instruments. Four years later, on March 11, 1982, the first synchrotron radiation was successfully observed.

What is synchrotron radiation? 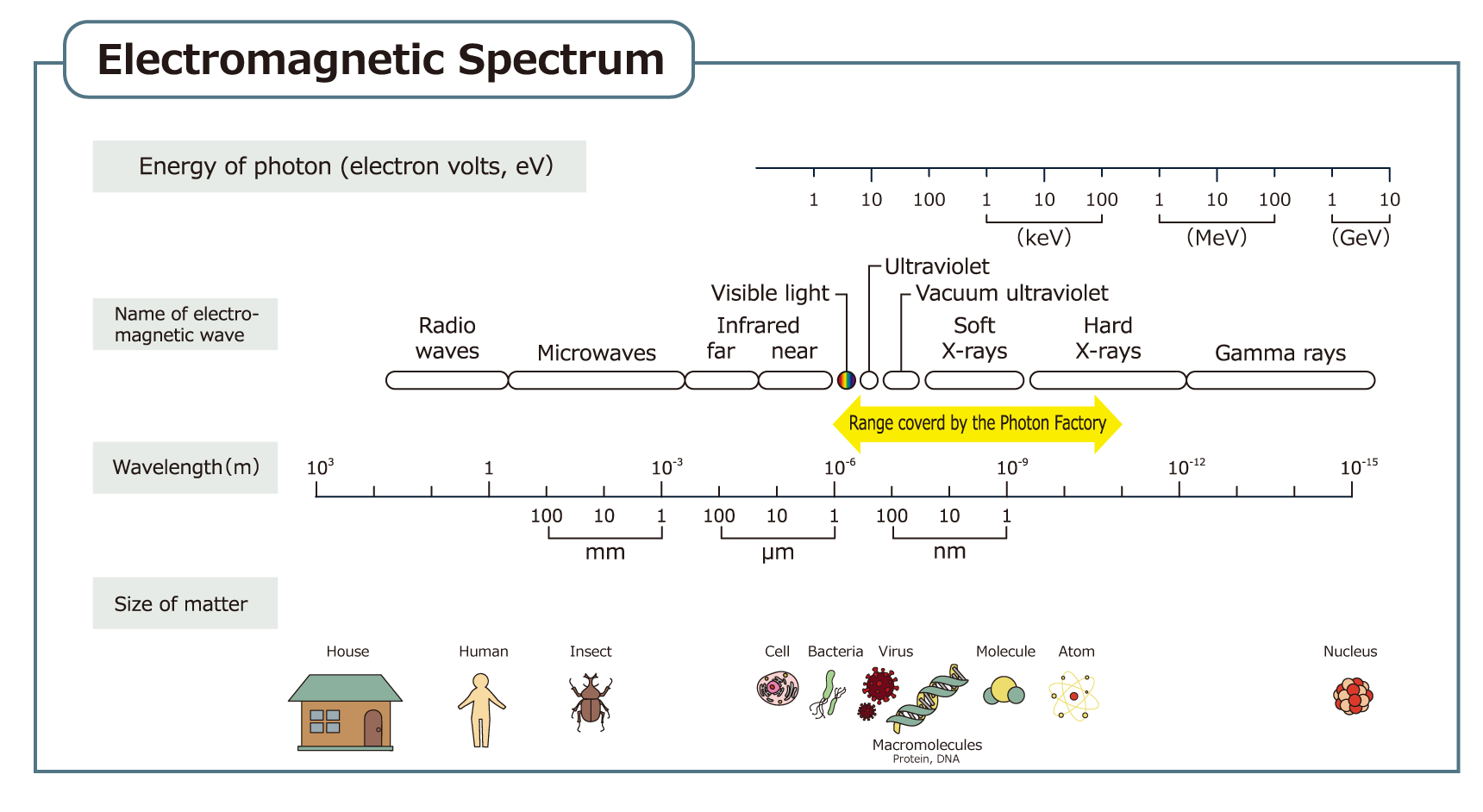 To emit synchrotron radiation, electrons accelerated to nearly the speed of light are injected into magnetic field created by bending magnets. Then, electrons change direction of travel and electromagnetic waves are emitted in the tangential direction of the curve drawn by the electron orbit. This electromagnetic wave is synchrotron radiation, which is highly collimated owing to the relativistic effect. The electrons are kept on their circular path with the help of strong magnetic fields applied by the bending magnets. This type of accelerator is called a storage ring because it accumulates the incident electrons. 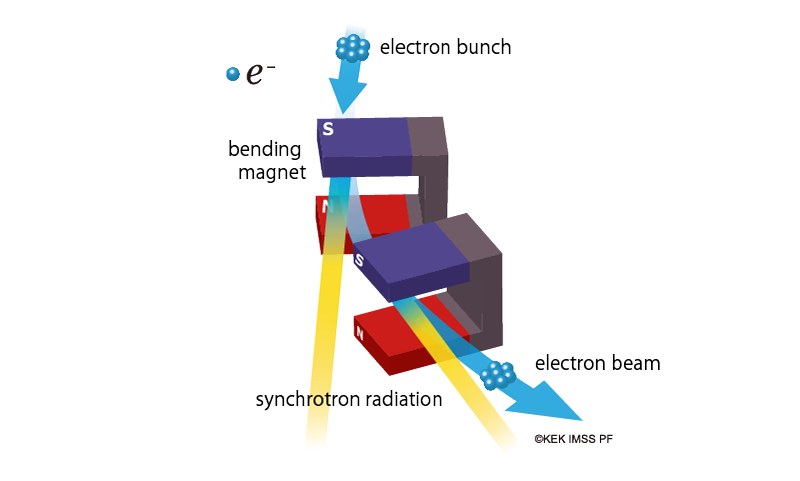 Why use synchrotron radiation?

Because synchrotron radiation has a shorter wavelength than visible light, it can identify smaller structure than with optical microscope. When light interacts with a material, various phenomena occur reflecting the properties of the material, such as refraction, absorption, reflection, and scattering. In addition, a change in electronic state occurs in materials exposed to high-energy radiation. These reactions also depend on the energy of the radiation.

At the time of KEK’s founding, about 50 years ago, researchers of X-ray optics and crystallography began to consider the use of synchrotron radiation. At that time, it was called the “dream light” that would revolutionize science and technology. Working groups were formed by researchers who wanted to use synchrotron radiation. In 1973, scientists from various fields came together to form the organization with the name “Photon Factory”. Thus, the concept of a synchrotron radiation facility where various phenomena caused by the interaction of light and matter could be observed in various ways was materialized.

At the time, the SRS at Daresbury Laboratory in UK was the only dedicated synchrotron radiation facility constructed to use X-rays in the world. The Photon Factory was unique and sophisticated accelerator, designed as an elliptically shaped accelerator having straight sections for insertion devices.

The Photon Factory ring has 28 beam ports for synchrotron radiation, due to the structure of the building the number of currently available ports is 23, and some branch beamlines can be constructed each of them. Currently, when the Photon Factory ring is in operation, 38 experiments can conduct independently at the same time.

In 1981, there were only six staffs in the Photon Factory Instrumentation Division, but more than 200 researchers came from universities, organized working groups, and participated in the design and the construction of beamlines.

From late 1981 to March 1982, the expansion of the experimental hall was underway so that more beamlines could be constructed. The linear accelerator was completed in January 1982, and the electron beam was successfully accelerated to 2.5 GeV in February.

The commissioning  continued until midnight every day, and on March 11, exactly one month later, electron was stored in the Photon Factory ring for the first time. On the same day, synchrotron radiation was successfully observed at the experimental hall. Later that night Dr. Yoshiyuki Amemiya, a researcher at Photon Factory at the time, now President of Japan Synchrotron Radiation Research Institute, wrote in the laboratory notebook that they had taken their first transmission Laue photographs. The experiment conducted with Dr. Masami Ando, an associate professor, and Dr. Peter Spieker, a visiting researcher. The samples subjected to the first synchrotron radiation experiment were crystals of silicon (Si) and lithium niobate (LiNbO3).

Photon Factory’s first beam attracted much attention including television and newspaper coverage. In April, President François Mitterrand from France, which was considering a synchrotron radiation, visited the Photon Factory. 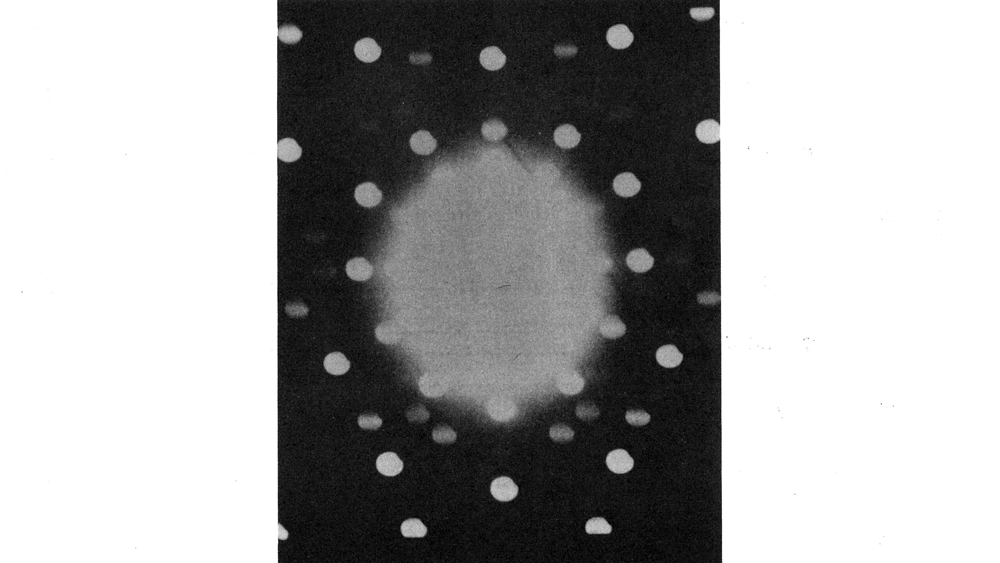 The construction of an experimental facility is not the end of the process. The Photon Factory in particular was an accelerator that KEK had never handled before. Until then beam stability at a target was required at the accelerators in KEK,  but  high brightness and high stability over the entire accelerator is required for a synchrotron radiation experiments. In the early days of the Photon Factory, accelerator researchers and engineers had to solve many problems while making improvements to the equipment. However, as they continued to steadily improve the equipment, they accumulated experience in the high-power radiofrequency technology required to accelerate electrons. 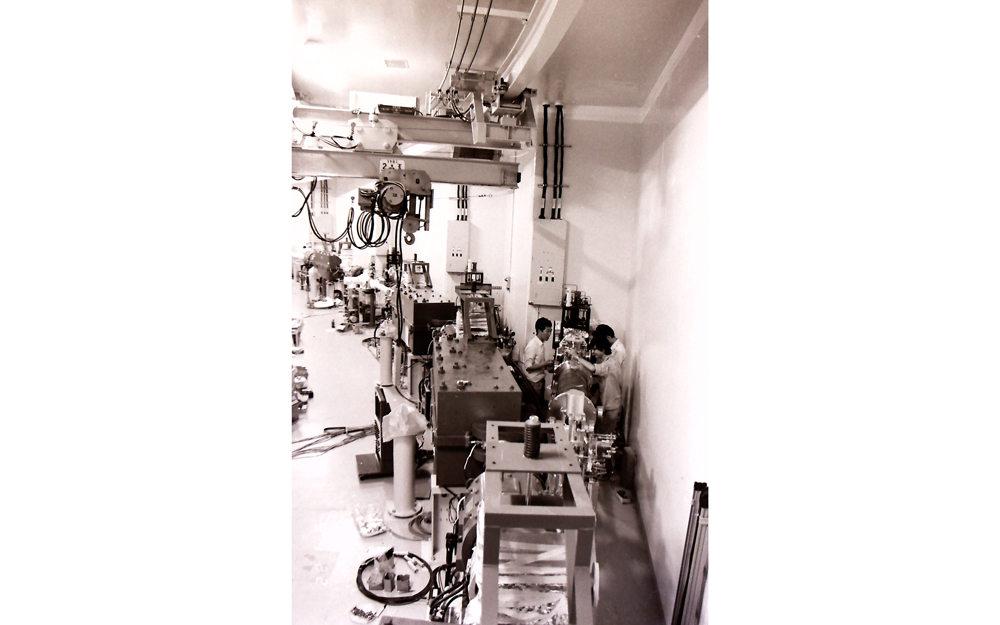 Construction of a front-end of a beamline (May 1982)

Between 1985 and 1986, an improvement of the ring vacuum system and the addition of electromagnets to the ring were carried out. As a result, the beam current was greatly increased and beam emittance was greatly reduced, resulting in a significant increase in the brilliance of the synchrotron radiation. Brilliance is the number of photons per unit time unit area unit solid angle; the higher the brilliance, the brighter and more collimated light.

The TRISTAN Accumulation Ring, AR, built next to the Photon Factory light source building as a booster accelerator for the TRISTAN Project, was operated at 8 GeV. From the beginning of its construction, an experimental hall for synchrotron radiation experiments was constructed in order to use higher energy X-rays as parasitic use of AR.

In the 1990s, the world began to see the emergence of “third-generation” light sources, high-brightness synchrotron radiation sources, and the second-generation Photon Factory was becoming an out-of-date facility. However, in the first half of 1997 the 2.5 GeV storage ring was shut down and underwent an upgrade, which succeeded in increasing the brilliance of all beamlines by a factor of 5 to 10.

The Photon Factory achieved performance comparable to third-generation light sources. The technology developed at this time became a model for subsequent projects around the world.

In 2005, the accelerator’s magnets were replaced with compact ones, and the more straight sections and more space for insertion devices were constructed. In the newly created straight sections, short-gap in-vacuum undulators, which were developed at Photon Factory, were installed to enable the use of higher luminosity light. For example, the analyses of samples brought back by asteroid explorers HAYABUSA and HAYABUSA2 have benefited from this high-brightness light. 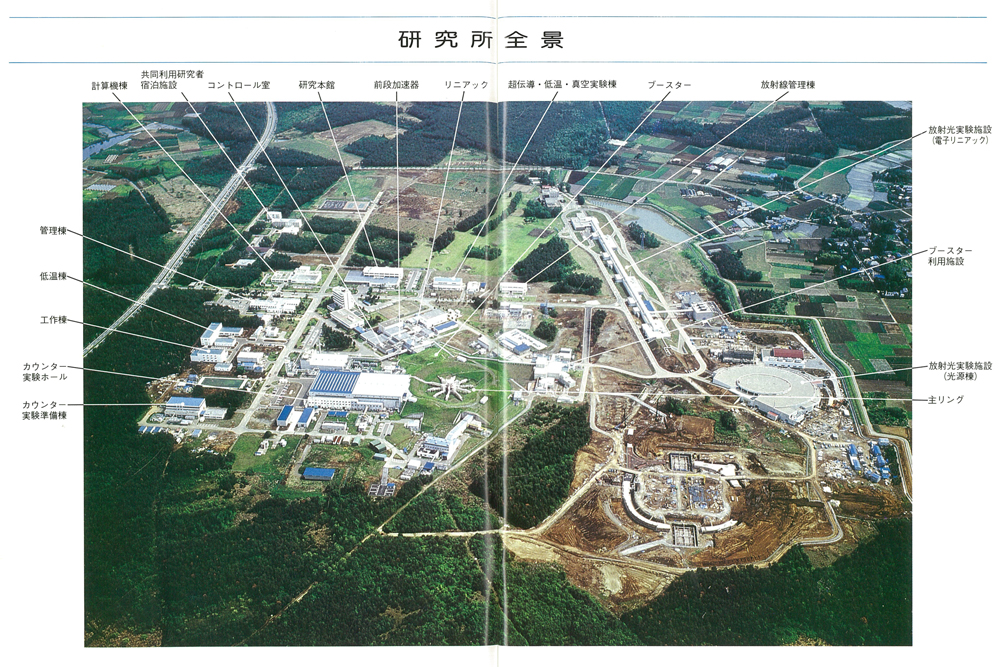 And up to the present, Photon Factory has continued to evolve through frequent maintenance and refurbishment of beamlines. Stimulated by the success of Photon Factory, many synchrotron radiation facilities have been constructed in Japan, including SPring-8.

This year, Photon Factory published a conceptual design of a new light source named the Hybrid Ring, which enables simultaneous use of two beams, one stored beam and the other single pass beam from injector linac. As a pioneer in accelerator and synchrotron radiation, we continue to take up the challenge of the future light source.

Photon Factory emerged as a cutting-edge technology 40 years ago and has continued to function as an essential research infrastructure for many materials and life science research and technology developments. It can be called not only a historical experimental facility, but also a mature facility that has always been nurtured in step with the times, accumulating technology and experience.