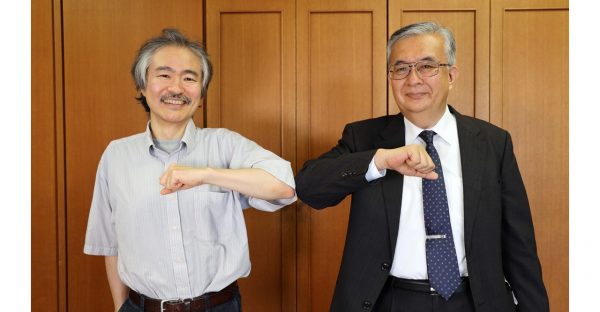 
KEK is awarded to host a new world premier international research center for quantum-field measurement systems. It is the 14th World Premier International Research Center Initiative (WPI) promoted by the Ministry of Education, Culture, Sports, Science and Technology (MEXT) such as Kavli-IPMU.

The new center’s name is the International Center for Quantum-field Measurement Systems for Studies of the Universe and Particles (QUP). It will be directed by Dr. Masashi Hazumi, a professor at the Institute of Particle and Nuclear Studies, KEK, and the PI of LiteBIRD, a space mission led by Japan Aerospace Exploration Agency (JAXA) for cosmic microwave background (CMB) measurements. He also worked in various international projects for cosmology and particle physics, including Belle at KEK.

QUP will integrate particle physics, astrophysics, condensed matter physics, measurement science, and systems science in the works of invention and development of new systems for measuring quantum fields (space-time with particles and quasiparticles created and annihilated, and associated physical quantities).

“I am thrilled about the launch of QUP. As the director, I want to support the Principal Investigators (PIs) and other researchers in taking on the challenge of making a giant leap forward. I am also delighted with new studies toward social implementation with the research cooperation of the Toyota Group,” Hazumi says, “and as one of the PIs, I will also work on the LiteBIRD satellite that I initiated and is the flagship project of QUP.”

The KEK Director General, Dr. Masanori Yamauchi, welcomes the new initiative, “KEK will support QUP’s missions strongly. There are many research groups around KEK having great interest in the activities at QUP. Collaboration with those groups will also be beneficial. I hope that the outcome from QUP will significantly boost KEK’s research as a whole.”

QUP has a characteristic of the global and diverse nature of quantum-field measurement. In addition to basic science, it will promote interdisciplinary research that transcends the boundaries of industry and academia. QUP will also promote corporations with world top institutes by opening three satellite offices in the Toyota Central R&D Labs. in Aichi, Japan, ISAS/JAXA in Kanagawa, Japan, and the University of California, Berkeley in the US.

“I am exhilarated to launch a satellite of QUP at Berkeley. I believe it has great potential for making great discoveries in many fields including my field of CMB observations,” says Prof. Adrian T. Lee at UC Berkeley.

PIs will join from Japanese and foreign institutes including AIST, Tohoku University and the University of Oxford (UK), in addition to PIs from KEK and three satellite offices mentioned above.

“QUP will break national boundaries and accelerate the development of novel instruments for measuring quantum fields. I am excited to start the discovery voyage with this talented team.” Prof. Daniela Bortoletto at the University of Oxford says.

KEK is in the process of establishing QUP, aiming to start its activities by the end of this year.