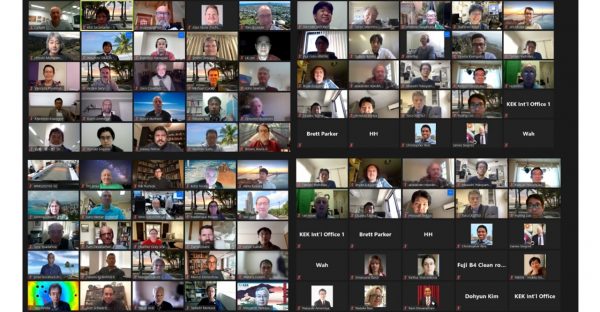 
The US-Japan mini-symposium on high-energy physics was held online from April 22 (Thu) to 24 (Sat).

This symposium was held to commemorate the 30th and 40th anniversaries of the US-Japan Science and Technology Cooperation Program (in high-energy physics), which began in 1979 under the agreement between the U.S. and Japanese governments to develop US-Japan  cooperation further. The symposium will be held every two years to promote research activities in cooperation with the US and Japan. And this symposium was the first one.

This project aims to conduct joint research using the accelerator facilities of both Japan and the U.S., and it has produced various results so far. It also plays a role in human resource development, as young Japanese researchers dispatched to the U.S. through this project and have become leaders in universities and research institutes nationwide.

In addition, a session related to the Snowmass Process, a medium- to the long-term research planning process for particle physics in the United States, was held to discuss the future direction of the US-Japan Science and Technology Cooperation Project.

《A view of the poster session at the “SpatialChat” venue》

On the second day of the symposium, a poster session was held using the online platform “SpatialChat,” and researchers gave poster presentations on their research results.

Participants were free to move between the rooms (online spaces) assigned to each poster by dragging their icons and conversing freely with the participants and other presenters. This provided a valuable opportunity for researchers from all positions, from graduate students to senior researchers, to get to know each other freely and deepen their knowledge.

After the poster session, six outstanding poster presenters were awarded the “Poster Award.”

The next symposium is scheduled to be held in the United States in 2023.

Following the symposium, the 43rd meeting of the Joint Committee on the US-Japan Science and Technology Cooperation Program (High Energy Physics) was held on April 24 (Sat).

The U.S. side was represented by Glenn Crawford, Director, Research and Technology Division Office of High Energy Physics, DOE. The Japanese side was represented by Yasuhiro Okada, Executive Director for International Affairs, High Energy Accelerator Research Organization, KEK. And officials related to high energy physics from the US and Japan respectively attended the meeting to discuss research cooperation between the US and Japan in high energy physics. And the committees decided on the cooperate activities to be implemented in FY2021.

The next meeting of the committee will be held in the United States in 2022.