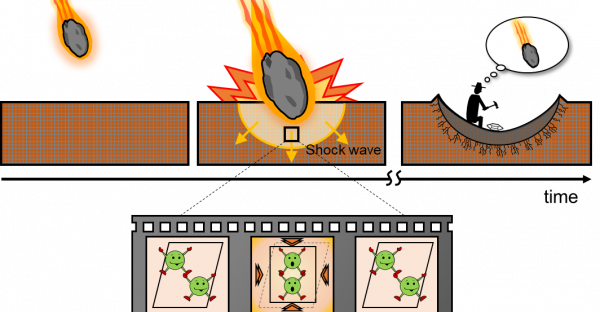 ＜KEY POINTS＞
〇Shock experiments were performed on baddeleyite (a zirconia mineral) in a laboratory, during which time its crystal structure dynamics were observed directly using a synchrotron X-ray.
〇 The crystal structure changed upon compression before returning to its original state when released.
〇 Geologists can use this information to estimate the scale of a past impact event using baddeleyite present in rocks.

Collisions of celestial bodies have formed and affected the evolution of planets. One well-known hypothesis is that an asteroid impact caused the mass extinction of dinosaurs on Earth ~65 million years ago. Understanding the scale of an impact event is essential to studying the evolution of a similar planet. Impact events cause shock metamorphism in rocks and minerals in the crust of a planet, and shock metamorphosed minerals can be used to identify and date impact events and as barometric indicators. Baddeleyite (ZrO2) is one mineral that can be used as a shock-pressure barometer. The mineral is widespread on Earth, the Moon, Mars, and meteorites; it is also known to show traits of shock metamorphism.

To date, our understanding of how minerals are affected by impact-induced shocks have been based on shock recovery experiments and the associated wave profile measurements in laboratories. However, shortcomings in temporal or spatial resolutions have made it impossible to determine a microscopic view of the conditions that a mineral underwent during an intense shock event. It was thought that the crystal structure of baddeleyite could change under shock compression conditions but the mineral did not retain its changed structure after the event. Therefore, direct observation of the response of the crystal structure during a shock is required to understand the effect of the latter on the mineral.