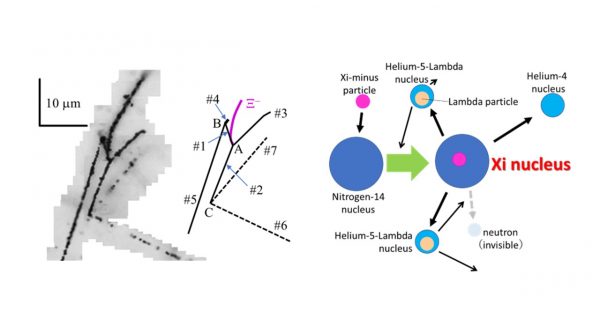 An international research group led by Senior Professor Kazuma Nakazawa and Postdoctoral Fellow Masahiro Yoshimoto (Graduate School of Education and Engineering, Gifu University), Assistant Professor Junya Yoshida (Graduate School of Science, Tohoku University) and Professor Toshiyuki Takahashi (Institute of Particle Physics and Nuclear Studies (IPNS), High Energy Accelerator Research Organization (KEK)) has observed of a novel hypernucleus called the Xi nucleus. The Xi nucleus contains a Xi-minus particle (i.e. negatively charged Xi particle) with two strange quarks. This Xi nucleus was produced in the Japan Proton Accelerator Research Complex (J-PARC) E07 experiment. The event has been named the Irrawaddy event after the majestic river in Myanmar, the home country of the Gifu University student who detected it. Analysis shows that the Irrawaddy event was produced by the strong attraction (i.e. high binding energy) between a Xi-minus particle and a nitrogen-14 nucleus. Further analysis indicates that the binding energy was five times that of an event announced by the present research group in February 2021 (the Ibuki event). The Irrawaddy observation confirmed the attraction between the Xi particle and the nitrogen-14 nucleus due to the ‘strong interaction (i.e. nuclear force), which is much stronger than the electromagnetic interaction (i.e. Coulomb force). Furthermore, successful observation of the inner level structure of the Xi nucleus was achieved for the first. The discovery of the Xi nucleus was unexpected according to many current theories, and it is hoped that this discovery will lead to the development of a new theory in the future. Since strange-quark-containing hyperons such as Xi-minus particles are thought to appear in the cores of neutron stars, which are the densest objects in the universe and are considered giant nucleus, the results of this research will play an important role in our understanding of neutron stars.

The results of this research will be published in the online journal : Progress of Theoretical and Experimental Physics (PTEP) on 23rd July, 2021 at 17:00 (JST).