Over the past few years, fuel cells have become a focal point of research in eco-friendly technology because of their superior abilities to store and produce renewable energy and clean fuel. A typical type of fuel cell gaining ground is the oxide-ion-conducting fuel cell, which is primarily made of materials through which oxide ions (oxygen ions: O2–), can easily move. New materials with higher conductivity at low and intermediate temperatures, provide a number of advantages over commonly used fuel cells based on yttria-stabilized zirconia (YSZ)  electrolytes, such as higher power generation efficiency, longer lifetimes, and lower costs.

However, only a limited number of such materials are known and their application to developing fuel cells has largely remained at the laboratory scale. To truly achieve a sustainable energy economy, new oxide-ion conductors with high conductivity need to be discovered that can allow low-cost and efficient scaling up of these technologies.

Scientists from Tokyo Tech, Imperial and KEK set out to address this need, and in a recent study, identified a new oxide-ion-conducting material that may be a representative of an entire family of oxide-ion conductors.

The material in question has the chemical formula Ba7Nb3.9Mo1.1O20.05 and is classified as a “hexagonal perovskite-related oxide.” Prof Masatomo Yashima, who led the study, explains: “Ba7Nb3.9Mo1.1O20.05 shows a wide stability range and predominantly oxide-ion conduction in the oxygen partial pressure range from 2×10–26 to 1 atm. Surprisingly, bulk conductivity of Ba7Nb3.9Mo1.1O20.05, 5.8 × 10−4 S/cm, is remarkably high at 310 oC, and higher than bismuth oxide- and zirconia-based materials (Fig. 1).”* Prof Stephen Skinner comments that the fast oxide ion transport was unambiguously confirmed using the 18O tracer diffusion technique at Imperial.

Prof  Yashima and his team note that the crystal structure of Ba7Nb3.9Mo1.1O20.05 contains oxygen-deficient layers (c‘ in Fig. 2a and Fig. 2c) and that its high oxide-ion conductivity is attributable to the oxide-ion migration on the c‘ layers. In fact, they succeed in experimental visualization of O1−O5 oxide-ion diffusion pathways by the neutron-diffraction measurements at a high temperature 800 oC with SuperHRPD diffractometer of Prof Takashi Kamiyama’s group at KEK/J-PARC (Figs. 2b,d). Prof Yashima says that the oxide ions migrate via interstitialcy diffusion mechanism through interstitial octahedral O5 and lattice tetrahedral O1 oxygen sites and that the (tetrahedral)–(octahedral) diffusion pathways on the c‘ layer in Ba7Nb3.9Mo1.1O20.05 is the same as those in another hexagonal perovskite-related oxide Ba3MoNbO8.5–d. Therefore, Prof Yashima and his team claim that “The common feature of the diffusion mechanism would be a guide for design of oxide-ion conductors with the hexagonal perovskite related structures and that the present finding of high oxide-ion conductivities in rare-earth-free Ba7Nb3.9Mo1.1O20.05 suggests the ability of various hexagonal perovskite related oxides as superior oxide-ion conductors”.* 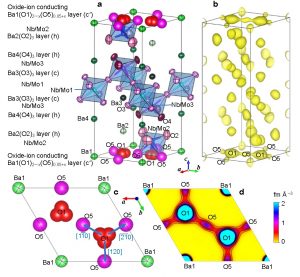 About Tokyo Institute of Technology Tokyo Tech stands at the forefront of research and higher education as the leading university for science and technology in Japan. Tokyo Tech researchers excel in fields ranging from materials science to biology, computer science, and physics. Founded in 1881, Tokyo Tech hosts over 10,000 undergraduate and graduate students per year, who develop into scientific leaders and some of the most sought-after engineers in industry. Embodying the Japanese philosophy of “monotsukuri,” meaning “technical ingenuity and innovation,” the Tokyo Tech community strives to contribute to society through high-impact research.
https://www.titech.ac.jp/english/

About High Energy Accelerator Research Organization (KEK) KEK was established to promote various types of researches as a center of excellence for overall development of Japan’s accelerator science (particle and nuclear research using high energy accelerators, research on the structure/function of materials including living organisms, research on improving the accelerator performance, and related basic technologies). As the Inter-University Research Institute Corporation, KEK provides researchers across the country and abroad with opportunities for research. With the Tsukuba and Tokai campuses as centers for excellence, KEK joins international collaboration experiments and developments.   In addition, KEK is in charge of the School of High Energy Accelerator Science of the Graduate University for Advanced Studies (SOKENDAI).
https://www.kek.jp/en/

About Japan Proton Accelerator Research Complex (J–PARC)J-PARC is a high intensity proton accelerator facility, and it aims at the frontier in materials and life sciences, nuclear and particle physics. It is a joint project between KEK and Japan Atomic Energy Agency.  SuperHRPD is installed at the Materials and Life Science Experimental Facility (MLF) of J-PARC.
https://j-parc.jp/c/en/index.html