Ionic transport has been studied extensively over the years for energy devices such as fuel cells and batteries using Li+, H+, Ag+, Cu+, F-, and O2-. Yet as Genki Kobayashi and Ryoji Kanno point out in a recent report, hydride ions (H-) may be particularly useful for high-energy-density storage devices. Using an oxyhydride solid state cell they have now demonstrated pure H- conduction in an oxide for the first time.

Metal hydrides tend to have an inflexible lattice, which makes H- transport difficult, so the researchers turned to oxyhydrides where oxygen and hydrogen share the same lattice sites. Another challenge is the high electron-donating properties of H-, which means that the electrons will dissociate from the H- to produce protons and electrons, giving rise to electron rather than hydride-ion transport. As a result the team sought a system containing cations that were more electron-donating than the H-.

Kobayashi and Kanno collaborated with colleagues from the Institute for Molecular Science, Japan Science and Technology Agency, Tokyo Institute of Technology, Kyoto University and High Energy Accelerator Research Organization(KEK) in Japan. They examined how the structure of their oxyhydride compounds changed with composition and synthesis conditions (Fig. 1). They also studied characteristics of the electronic structure that suggested an ionic Li-H bond in the compound, namely the existence of H- in the oxides.

They then used La2LiHO3 in an orthorhombic structural phase (o- La2LiHO3) as an electrolyte in a cell with titanium anode and titanium hydride cathodes (Fig. 2). Phase changes at the electrodes by the discharge were consistent with a Ti-H phase diagram suggesting hydride-ion transport. They conclude: "The present success in the construction of an all-solid-state electrochemical cell exhibiting H- diffusion confirms not only the capability of the oxyhydride to act as an H- solid electrolyte but also the possibility of developing electrochemical solid devices based on H- conduction."

Batteries and fuel cells are electrochemical devices. In lithium ion batteries, for example, lithium ions move from a positive to a negative electrode during use, and back again during charging. They are now used ubiquitously for energy storage in mobile devices but improvements to the energy density, performance and environmental sustainability of these batteries is still sought to extend their use to other devices, such as cars. The ions move between electrodes through an electrolyte. Solid-state electrolytes have safety and stability advantages over liquids as they are less prone to leak and short circuit.

In other types of electrochemical device different types of ion move back and forth, such as positive hydrogen ions in fuel cells. The charge and size of the ions affects its transport.

In batteries atoms can be oxidised to form positive ions that are attracted to the negative electrode where they are reduced or vice versa. These reduction and oxidation reactions are described as redox reactions.

Although hydride-ion conduction has not been used in batteries, there are potential advantages for using these ions. They are similar in size to oxide and fluoride ions and have strong reducing properties. The standard redox potential of H-/H2 is -2.3 V - close to Mg/Mg2+ (-2.4 V) which has already attracted interest for batteries. Hydride ion conductors may therefore be applied in energy storage or conversion devices with high energy densities.

They found that La2LiHO3 exists in two chemical phases--orthorhombic (o) and tetragonal (t) depending on the ratio of the starting chemicals and synthesis conditions. Studies of the conductivity of the compounds showed that the compound compositions that led to more vacancies were more conductive, indicating a relationship between vacancies and ionic diffusion. They also showed that the conductivity could be increased by increasing the number of vacancies. 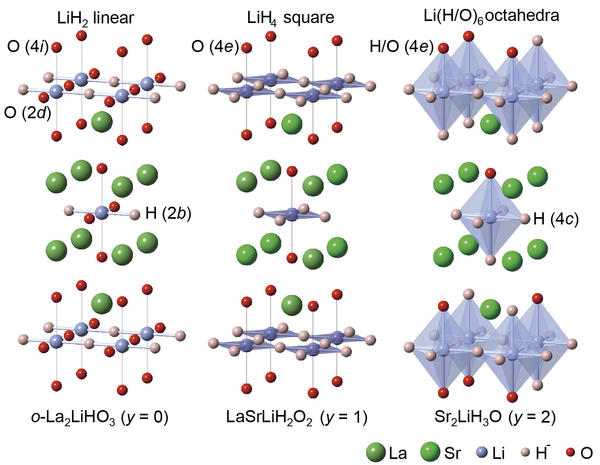 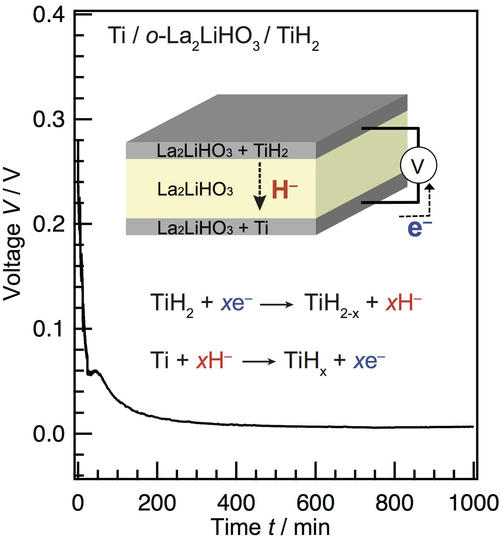 Fig. 2 All-solid-state hydride-ion cell. A discharge curve for a solid-state battery with the Ti/o-La2LiHO3/TiH2 structure. The inset shows an illustration of the cell and the proposed electrochemical reaction.