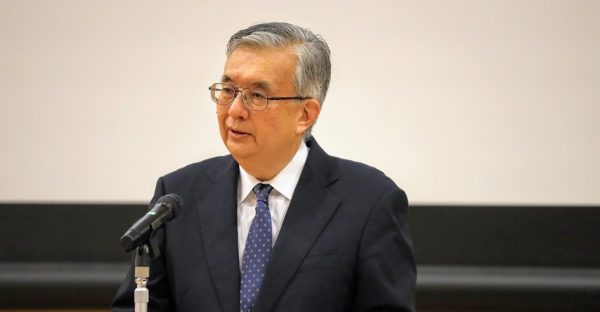 This year is an important year for KEK. Not only is it a special year because of KEK’s 50th anniversary, it is also the year in which to carry out various reforms one year before the start of our fourth mid-range goals period, and the year when a new structure called “Rengotai” (federation) will be launched. On the occasion of this milestone, I would like to talk to you about KEK’s situation and my thoughts, and hope that it will get you thinking as well. This year is also my last term as Director General, so I would also like to touch on how I plan to make my final chapter rosy for KEK.

First of all, regarding the 50th anniversary, KEK was established in 1971 as the first laboratory for inter-university research, with the Institute of Nuclear Study (a research laboratory connected to the University of Tokyo) as its parent body. Its role is to provide university researchers with a facility to conduct research and produce scientific results together. Working together with university researchers, KEK has in the 50 years since its establishment advanced a wide range of sciences, from particle physics to materials structure science through the use of particle accelerators. Since then, other inter-university research institutes have been established, and the modality of shared use has changed, but KEK has continued to follow the same path, working to improve the performance of particle accelerators and through them to create new science with university researchers. Such an approach is genuinely useful for academic research, and works effectively to generate research results. This is why we have been able to continue fulfilling our role in inter-university research for half a century. Various events are planned to celebrate the 50th anniversary this year, and I hope that you will participate actively, learn about KEK’s long history, and take these events as opportunities to think about the next half-century.

Throughout KEK’s history, social and economic conditions have changed in various ways, and with this, what society demands from research institutions has changed as well; there are many major changes even just within recent trends. Among these, I would like to touch on two important points. The first is a move towards carbon neutrality. Amid a mounting global sense of purpose to mitigate climate change and secure sustainable energy, the Japanese government has declared that it aims to achieve net-zero emissions of carbon dioxide by 2050. This will have a significant impact on the whole of society; it will be necessary to significantly increase power generation from natural energy, develop highly efficient electricity storage, etc., and install the new infrastructure throughout society. In addition to these developments, energy conservation and shifts to low carbon will need to be further promoted. The reality is that the particle accelerators that are the basis of KEK’s research consume large amounts of electricity, and our carbon dioxide emissions are very high. In order for particle accelerator research to continue to receive societal support, in addition to efforts such as energy conservation and the use of natural energy in accelerators, it is necessary to make further efforts to use accelerators to create wisdom that can contribute to the creation a sustainable society, and to call society’s attention to such efforts. This is why we need KEK-wide initiatives.

The second point is to consider our contribution to Society 5.0. Whereas Society 3.0 was a social structure centered on industrial production and 4.0 revolved around information and communication technology, 5.0 aims to create a new society in which new value is found by integrating cyberspace and real space with AI and advanced ICT technologies. This alone is not enough to comprehend the full concept, but when people say that machines will take over human work, such as self-driving cars, robots that think for themselves, and automation of production, I think it will certainly be a major trend that changes society. Universities and research institutes are required to play suitable roles in achieving this new society, but what should KEK do? Much of the research conducted at KEK cannot be expected to produce economic effects in the short term; rather, I believe that its significance lies in increasing humanity’s latent potential through basic research that sheds light on universal laws of nature and the structure of matter. Therefore, research and human resource development directly linked to Society 5.0 are probably beyond KEK’s purview, but the knowledge and wisdom gained through basic research will surely contribute to enriching human life in the future. In that sense, I think it could be said that KEK’s research will contribute to Society 6.0 and 7.0. It should be remembered that many of the technological advances of today are the result of the accumulation of small improvements based on quantum mechanics, which was theorized 100 years ago.

The most important thing for KEK is a group of particle accelerator experts who can develop and operate highly advanced accelerators, and who make up the framework of KEK together with its structure for using accelerators to produce scientific results. All of the particle accelerators operated by KEK have very high potential, and various scientific results can be expected from them in the future. In terms of budgets, the situation remains difficult, but we are seeing a considerable improvement compared to about three years ago, and I think the future is starting to look brighter. This is the result of progress in society’s understanding of KEK’s research and of the efforts of the relevant departments at the Ministry of Education, Culture, Sports, Science and Technology as well as of KEK personnel. Since it is fundamentally important for KEK, which mainly uses large particle accelerators as its principal research method, to obtain a sufficient operating budget, I will keep working hard to obtain funds by developing strategies to secure required funding. At the end of last fiscal year, the KEK Roadmap, which surveys KEK’s research plan for the next six years, was completed, and the KEK Project Implementation Plan (KEK-PIP) for putting the Roadmap into practice is scheduled to be completed by the end of this fiscal year. Based on these, I hope to move forward with you toward even greater results. And while we pursue results, I would like to work with you to think about what kind of path KEK should take toward the next half-century.