Home > NEWS > Topics > THE AWARDING CEREMONY OF THE ORDER OF MERIT OF THE REPUBLIC OF SLOVENIA TO DR. MASANORI YAMAUCHI

THE AWARDING CEREMONY OF THE ORDER OF MERIT OF THE REPUBLIC OF SLOVENIA TO DR. MASANORI YAMAUCHI

On December 2nd, the awarding ceremony for the Order of Merit of the Republic of Slovenia, awarded to Dr. Masanori Yamauchi, the Director General of KEK, was held at the Embassy of the Republic of Slovenia in Japan. His contributions to the Belle and Belle ll experiments through collaboration with Slovene researchers over many years were recognized as was his merit in promoting Slovene science on the global stage. When H.E. Mr. Borut Pahor, the president of Slovenia, visited KEK on October 23rd, 2019, he announced that the Order of Merit of the Republic of Slovenia was to be awarded to Dr. Yamauchi. Initially, the award ceremony was planned to be held at the presidential palace of Slovenia. However, due to the COVID-19 pandemic, the ceremony was held in a hybrid format with online congratulatory remarks. 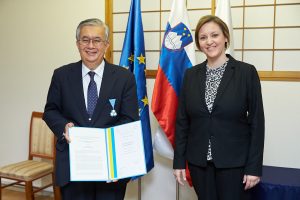 Following the singing of the national anthems of both countries, the exceptional merits of Dr. Yamauchi, which led to his being awarded the Order of the Merit, were presented, and a medal and gifts were awarded by Ambassador Dr. Ana Polak Petrič. Dr. Yamauchi gave a speech to express his gratitude. Congratulations were also given by Prof. Igor Papič, the President of the University of Ljubljana; Mr. Seishi Shiobara, Director of the Scientific Research Institutes Division of MEXT and Ambassador Janez Premože, MFA Slovenia. Mr. Hideki Uyama, Director General of the European Affairs Bureau, MOFA Japan, congratulated Dr. Yamauchi for his achievements in the form of an official letter.

In the explanation of the Award, the Slovene contributions to and achievements in the Belle and the Belle ll experiments were also described including the fact that Dr. Peter Križan, researcher from Slovenia, who led an international research group made up of individuals from more than 20 countries, was selected as the spokesperson for the Belle ll experiment in 2009, which is a notable event in the field of science and technology in Slovenia.

At the end of the ceremony, warm messages from Dr. Peter Križan and Dr. Boštjan Golob were sent to Dr. Yamauchi.

This award will make the connection between both countries much closer and we hope the Belle ll research activity will be strongly promoted. 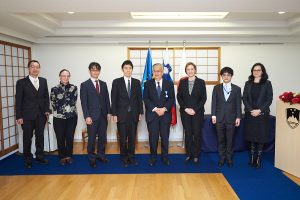