KEK Isotope Separation System (KISS) is being developed to study the basic properties of the exotic nuclei which have neutron magic number 126 as well as to apply the short-lived nuclei for the material science. 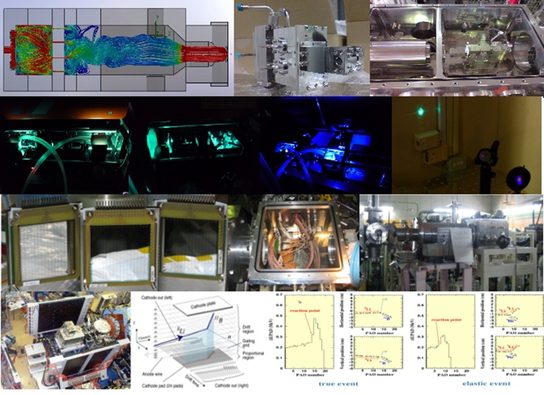 In the universe, the nuclei heavier than ions are considered to be synthesized in the explosive condition like supernovae. The lifetimes and the masses of the neutron-rich short-lived nuclei which have the neutron magic number 50, 82, and 126 are the only measurable quantities which can put constraint on the neutron densities and the temperatures on the astrophysical sites of the nucleosynthesis. In fact, many experimental facilities providing short-lived nuclei all over the world target these nuclei. Investigating the nuclei with the neutron number 50 or 82 is on-going at the current facilities, whereas for the nuclei of the neutron number 126, even the production method has not been established yet.
We adopted an exotic nuclear reaction called the multi-nuclear transfer reaction between the 136Xe beam and the 198Pt target. The nuclei of interest such as 200W or 202Os will be produced by transferring many nucleons between the nuclei. We’ll employ the resonant laser ionization technique to selectively ionize the specific element and the dipole magnet to choose the mass number, giving rise to selecting one specific isotope. The apparatus was named as KEK isotope separation system (KISS). The project started from 2010 and the KISS had been constructed at the RIKEN Nishina center.

In addition to the KISS Project, we’re developing a nondestructive method using the short-lived 8Li nuclei to understand the basic properties of the materials for the lithium cells. The 8Li beam is provided by the isotope separator on-line at Japan Atomic Energy Agency.