This secondary beam line extracts well-collimated neutral K mesons (kaons), which are produced by the interaction of protons with a metal target, to the forward direction. 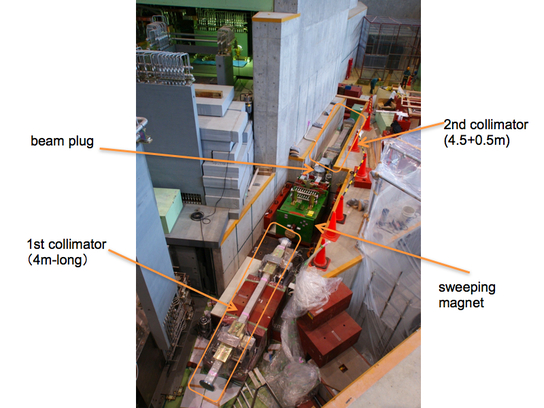 This is a secondary beam line of Hadron Experimental Facility in Japan Proton Accelerator Research Complex (J-PARC), built in JFY 2009 at the south area of the hall.

Among the variety of particles produced by the interaction of protons with a metal target, charged particles are swept out by magnets and thus neutral particles are extracted. With two metal collimators the neutral particles are well-collimated to be a “pencil” beam, which makes the beam line totally unique. During the accelerator operation in the autumn of 2009 measurements of the quality of the beam were conducted and the production of neutral kaons was confirmed.
A new experiment to study rare neutral kaon decays, E14 KOTO experiment, started in JFY 2013.