We study elementary particle physics which will be revieled by an extremely high energy electron-positron colliding accelerator, “International Linear Collider (ILC)”. We also carry out R&D on the detector for ILC. 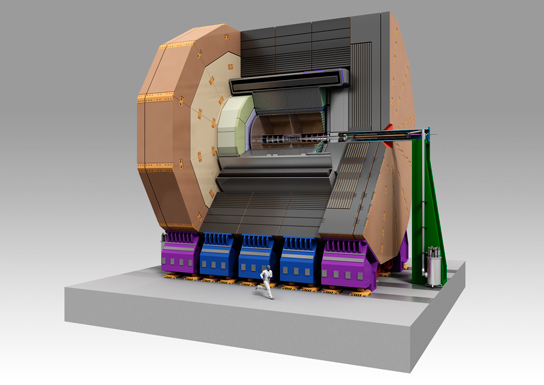 It is planned to build a linear colliding accelerator to carry out experiments with extremely high energy electron-positron collisions in order to resolve unsolved issues in elementary particle physics such as Higgs mechanism which is the origine of the mass, identity of the dark matter, and so on. We are investigating how much we can find out in detail on these physics challenges which ILC faces by simulation studies. We are also carrying out R&Ds on advanced detectors for ILC experiments, and the achievements have posibilities of application to material science or astrophysics, as well as other particle physcs experiments.

ILC is a project which aims at elementary particle physics experiments for physics at 1 Tela-electron volt (TeV) energy region. High energy electrons and positrons collide with each other, and extrmely hihg energy state similar to the universe just after th Big Bang is realized in the laboratory. We can tackle mysteries of creation of the universe through revealing fundamental laws of elementary particles. Particls created by high energy electron-positron collisions splash to all directions from the collision point. By measuring the directions and energies of these particles accurately, we can find what reactions of elementary particles have happened. For this purpose, very accurate and huge detectors are needed. For ILC, two large detectors, ILD and SiD, are proposed. For each detector, scientists all over the world work on the design optimization and development of detector technologies, and submitted a detailed baseline design report as a part of ILC technical design report (TDR) in 2013. KEK members are involved in the ILD design group, and are engaged in activities such as simulation studies of elementary particle reactions observed with ILD detector and R&D of detector elements of ILD such as time projection chamber (TPC) which measures tracks of charged particles and a vertex detector which utilizes fine pixel CCDs to measure charged particle tracks with extreme precision to determine the decay vertex of unstable particles.

Physics and detector study for ILC in Japan

TPC R&D at Asia for ILC