Discovering a hint of new physics lows from a ultra-high precision measurment of muon dipole moments by using a ultra-cold muon beam. 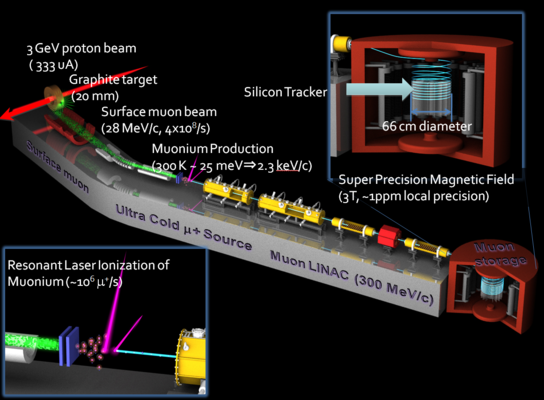 Muon being a charged fermion in a second generation of the lepton family has its dipole moments. Muon’s anomalous magnetic dipole moment (g-2) is measured to be slightly (about 1.5 pers per million) larger than that predicted from the standard model of particle physics.

Confirmation of this deviation by an independent mesurement is highly desired. Muon’s electric dipole moment is expected from theoretical models beyond the standard model, but it has not been discovered unitl now. We measure muon’s anomalous magnetic moment and electric dipole moment with ultra-high precision by utilizing ultra-cold muon beam.

The ultra-cold muon beam spreads very little in transverse directions even after a long distance of travel, thanks to a muon source that is
cooled down to thermal energies. The beam is prepared by accelerating the thermal-velocity muons generated by laser-resonant ionizaton of
muonium atom (a bound state of a positive muon and an electron). The ultra-cold muon beam is stored in a super-high precision magnet where
spin precession of muon under magnetic field is measured by detecting muon decay. We plan to realize the measurement with intense pulsed
proton beam at J-PARC and state of the art technologies, such as intense Lyman-alpha laser, first-ever muon acceleration LNIAC, precision
magnetic field control, and particle tracking.