We cool down neutrons to very low temperatures, where almost all materials are flozen, and then confine these ultracold neutrons in a material bottle. We are aiming to resolve the mystery of baryogenesis in the universe. 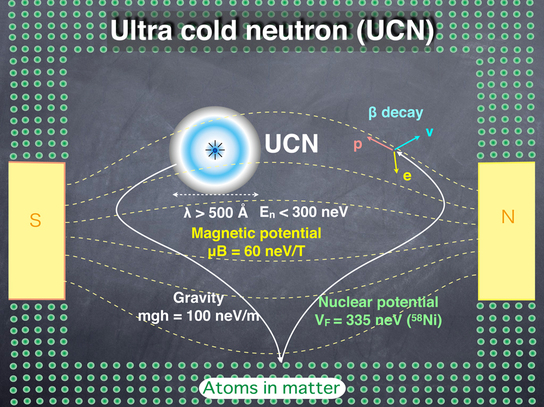 We have realized a world competetive ultracold neutron (UCN) source in a collaboration between KEK, Osaka and Tohoku at RCNP based on the UCN studies which was started at KEK. We are studying a neutron EDM measurement by means of UCN. The existence of the EDM means time reversal symmetry violation, which is related with the creation of matter at Big bang. //We can confine UCN in an experimental bottle. The elementary particle has wave-particle duality. The neutron wave is repelled from the nucleus because of distortion in the nuclear potential. The neutron wave length is longer than 500 A, which is much longer than interatomic distances in material. As a result, inciden neutrons see an average repulsive potential V_F in the meterial. The value of V_F is in a 100 neV region. Neutrons of energies less than V_F are completly reflected from the surface of material for all incident angles. These neutros are defined as UCN. UCN are sensitive to weak forces. For the EDM measurement, we apply an electric field, where we measure neutron spin precession. We are developing an EDM apparatus, which comprises polarized UCN production and UCN spin precession apparatuses. 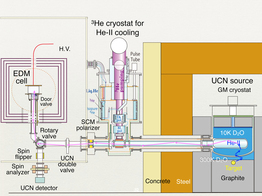 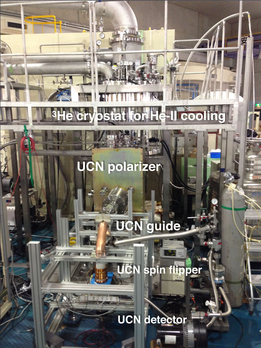 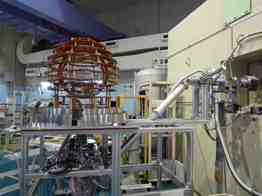