Belle II is an upgraded detector to allow the experiment to record the enormous numbers of particle processes that are produced by the SuperKEKB accelerator. The Belle II experiment will accumulate 50 times more data than the previous experiment, Belle, and pursue violations of the symmetry between particles and anti-particles as well as new laws of physics. 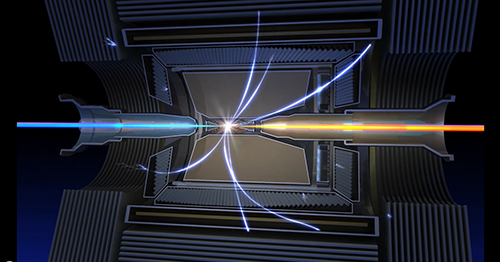 The construction of the SuperKEKB accelerator, which is an upgrade of the KEKB accelerator that operated for a decade from 1999, started in 2010 with the goal of 40 times higher collision performance. The energies of the electron and positron beams were changed to 7 and 4 billion electron volts, respectively. The expected collision performance is achieved by squeezing beam sizes to the nanometer level. The accelerator plans to start operation in JFY 2014. In order to cope with the higher beam intensity, the detector is also being upgraded. The inner detectors will be replaced with new ones to improve performance. A new collaboration, Belle II, has formed based on the Belle collaboration; it now consists of about 600 researchers from about 100 universities/laboratories in 23 countries/areas (as of December 2013). The researchers work together on construction of the detector, acquisition of data, and physics analyses. Analyses on 50 times more data than available to the Belle experiment will reveal violations of the symmetry between particles and anti-particles, rare phenomena that occurred in the early stages of the universe, and the nature of unknown particles and new interactions. These may lead to new laws of physics and an understanding of why anti-matter has disappeared from the universe.