Research on violations of the symmetry between particles and anti-particles and new physics laws are conducted using large numbers of particles, such as B mesons, produced by the KEKB accelerator. 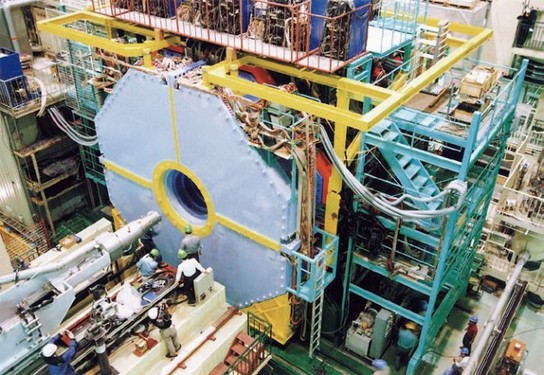 Investigations of large numbers of B mesons, tau particles and charm mesons, which are produced inside an experiment at the KEKB electron-positron accelerator collider, reveal violations of the symmetry between particles and anti-particles. These are rare phenomena that occurred at an early stage of the universe, and may reveal the nature of unknown particles and new interactions. In addition, these breakdowns of symmetry may lead us to new laws of physics and an understanding of why anti-matter has disappeared from the universe.

The B-factory accelerator at KEK (KEKB) collides 8 billion electron volts (8 GeV) electrons with 3.5 GeV positrons to produce large number of B mesons, tau particles, and charmed particles. Construction began in 1994 and operations started in 1999. The experiment ran for about a decade until 2010 while KEKB achieved the world’s best accelerator performance. The Belle experiment is an international collaboration consisting of about 400 researchers from about 60 universities/laboratories in 15 countries/regions (as of 2010). The Belle researchers constructed the detector, accumulated the data, and conducted physics analyses. They achieved a number of successes, such as the discovery of the violation of the symmetry between B and anti-B mesons in 2001 and validation of the Kobayashi-Maskawa theory. From 2010, a major upgrade of the KEKB accelerator (SuperKEKB) started, which aims for 40 times higher collision performance. Operation is expected to start in 2015. An upgrade of the detector is also in progress in order to cope with the higher beam intensities.

The Belle II collaboration has been formed for the experiment with the upgrated detector at SuperKEKB. The collaboration consists of about 600 researchers from about 100 universities/laboratories in 23countries/regions (as of 2014).