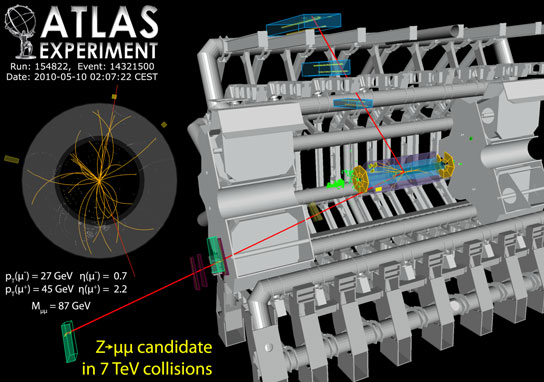 What build our universe and how they are built are our long lasting puzzles. Since the discoveries of quantum mechanics and theory of relativity, our understanding has greatly evolved based on development of the particle physics. The standard model, which explains quarks and leptons as elementary particles and various forces acting among those particles, has been established. The standard model describes how the elementary particles, originally massless, acquire mass, by implementing the mechanism called BEH mechanism, which naturally predicts the existence of Higgs particle. Recently we realized, by observing the universe, that unknown matter components, so called dark matter, must exist in the universe. The standard model cannot explain about the dark matter. So elucidation of it is the immediate aim of the energy frontier LHC experiments.

LHC (Large Hadron Collider): LHC is the world highest energy proton-proton collider, constructed at CERN. Accelerated protons traveling in opposite directions collide each other. Experiments at LHC aim to discover Higgs particles and new phenomena beyond the standard model. LHC conducted the first collision in November 2009. Then experiments started in 2010 with protons accelerated to 3.5 TeV (7 TeV collision energy), which was upgraded to 4 TeV (8 TeV collision energy) about one year later, and continued until the end of 2012. LHC is now under refurbishment to almost double the proton energy. The experiments will be resumed in early 2015 with the collision energy of 13 TeV, and soon after they will be operated at 14 TeV.

During construction, KEK contributed development and construction of the focusing quadra-pole superconducting magnets.

ATLAS experiment at LHC is an international collaboration, gathering worldwide about 3,000 researchers from 38 countries and regions. From Japan about 110 researchers, in KEK and other 15 universities, join the experiment. Japanese have been contributing to development and construction of the detectors, operation and physics analyses.

ATLAS has collected 7 and 8 TeV collision data of 28 fb-1 so far. Physics analyses have been conducted extensively, and the discovery of Higgs particle was finally established in 2013. We will be pursuing further beyond the standard model.

ATLAS detector under construction in an underground cavern (central calorimeter was about to be inserted in the huge eight-hold toroidal magnet coil); inside the calorimeter, the solenoid magnet constructed by Japanese group had been embedded. 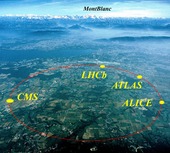 LHC accelerator tunnel shown in the red circle is actually located about 100 m deep underground. Also shown are the locations of four experiments.

The focusing quadra-pole superconducting magnets installed in the LHC tunnel