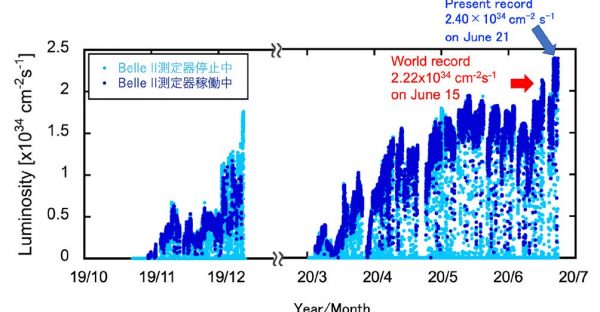 
Targeted cancer drugs work by striking a tight bond between cancer cell and specific molecular targets that are involved in the growth and spread of cancer. Detailed images of such chemical bonding sites or pathways can provide key information necessary for maximizing the efficacy of oncogene treatments. However, atomic movements in a molecule have never been captured in the middle of the action, not even for an extremely simple molecule such as a triatomic molecule, made of only three atoms.
A research team led by IHEE Hyotcherl of the Institute for Basic Science (IBS, South Korea) (Professor, Department of Chemistry, KAIST), in collaboration with scientists at the Institute of Materials Structure Science of KEK (KEK IMSS, Japan), RIKEN (Japan) and Pohang Accelerator Laboratory (PAL, South Korea), reported the direct observation of the birthing moment of chemical bonds by tracking real-time atomic positions in the molecule. “We finally succeeded in capturing the ongoing reaction process of the chemical bond formation in the gold trimer. The femtosecond-resolution images revealed that such molecular events took place in two separate stages, not simultaneously as previously assumed,” says Associate Director IHEE Hyotcherl, the corresponding author of the study. “The atoms in the gold trimer complex atoms remain in motion even after the chemical bonding is complete. The distance between the atoms increased and decreased periodically, exhibiting the molecular vibration. These visualized molecular vibrations allowed us to name the characteristic motion of each observed vibrational mode.” adds Ihee.