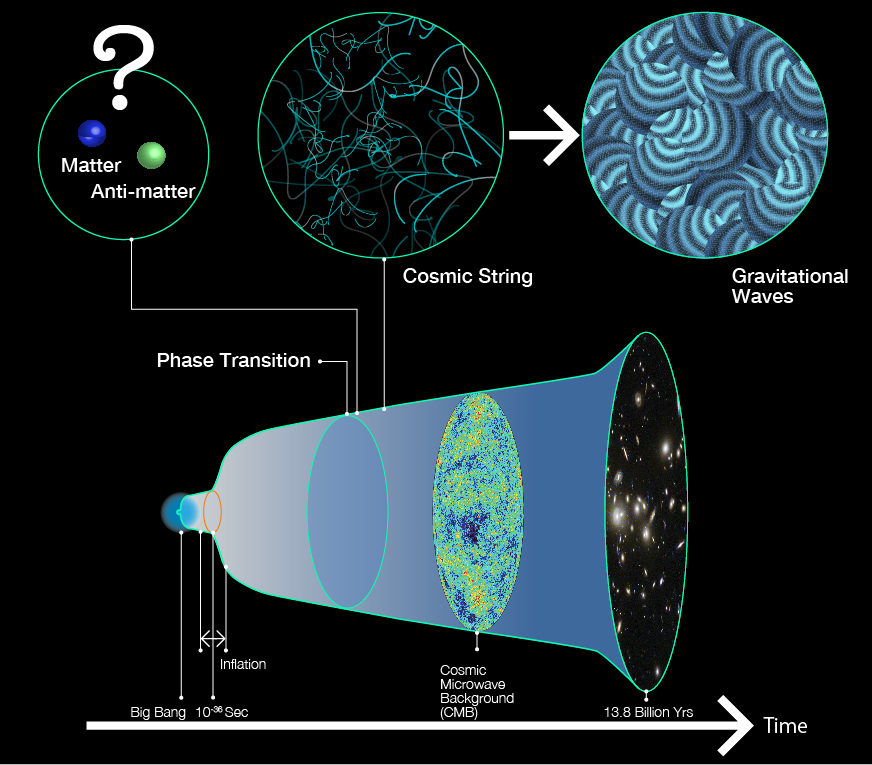 IMAGE CAPTION: Inflation stretched the initial microscopic Universe to a macroscopic size and turned the cosmic energy into matter. However, it likely created an equal amount of matter and anti-matter predicting complete annihilation of our universe. The authors discuss the possibility that a phase transition after inflation led to a tiny imbalance between the amount of matter and anti-matter, so that some matter could survive a near-complete annihilation. Such a phase transition is likely to lead to a network of "rubber-band"-like objects called cosmic strings, that would produce ripples of space-time known as gravitational waves. These propagating waves can get through the hot and dense Universe and reach us today, 13.8 billion years after the phase transition. Such gravitational waves can most likely be discovered by current and future experiments. (Original credit: R. Hurt/Caltech-JPL, NASA, and ESA Credit: Kavli IPMU - Kavli IPMU modified this figure based on the image credited by R.Hurt/Caltech-JPL, NASA, and ESA)

Recently discovered ripples of spacetime called gravitational waves could contain evidence to prove the theory that life survived the Big Bang because of a phase transition that allowed neutrino particles to reshuffle matter and anti-matter, explains a new study by an international team of researchers.

But our existence contradicts this theory. To overcome a complete annihilation, the Universe must have turned a small amount of anti-matter into matter creating an imbalance between them. The imbalance needed is only a part in a billion. But it has remained a complete mystery when and how the imbalance was created.

“The Universe becomes opaque to light once we look back to around 400,000 years after its birth. This makes the fundamental question of ‘why are we here?’ difficult to answer,” says paper co-author Jeff Dror, postdoctoral fellow at the University of California, Berkeley, and physics researcher at Lawrence Berkeley National Laboratory.

“A phase transition is like boiling water to vapor, or cooling water to ice. The behavior of matter changes at specific temperatures called critical temperature. When a certain metal is cooled to a low temperature, it loses electrical resistance completely by a phase transition, becoming a superconductor. It is the basis of Magnetic Resonance Imaging (MRI) for cancer diagnosis or maglev technology that floats a train so that it can run at 300 miles an hour without causing dizziness. Just like a superconductor, the phase transition in the early Universe may have created a very thin tube of magnetic fields called cosmic strings,” explains paper co-author Hitoshi Murayama, MacAdams Professor of Physics at the University of California, Berkeley, Principal Investigator at the Kavli Institute for the Physics and Mathematics of the Universe, University of Tokyo, and senior faculty scientist at Lawrence Berkeley National Laboratory.

Dror and Murayama are part of a team of researchers from Japan, US and Canada who believe the cosmic strings then try to simplify themselves, leading up to tiny wobbling of spacetime called gravitational waves. These could be detected by future space-borne observatories such as LISA, BBO (European Space Agency) or DECIGO (Japanese Astronautical Exploration Agency) for nearly all possible critical temperatures.

“The recent discovery of gravitational waves opens up a new opportunity to look back further to a time, as the Universe is transparent to gravity all the way back to the beginning. When the Universe might have been a trillion to a quadrillion times hotter than the hottest place in the Universe today, neutrinos are likely to have behaved in just the way we require to ensure our survival. We demonstrated that they probably also left behind a background of detectable gravitational ripples to let us know,” says paper co-author Graham White, a postdoctoral fellow at TRIUMF.

“Cosmic strings used to be popular as a way of creating small variations in mass densities that eventually became stars and galaxies, but it died because recent data excluded this idea. Now with our work, the idea comes back for a different reason. This is exciting!” says Takashi Hiramatsu, a postdoctoral fellow at the Institute for Cosmic Ray Research, University of Tokyo, which runs Japan’s gravitational wave detector KAGRA and Hyper-Kamiokande experiments.

“Gravitational wave from cosmic strings has a spectrum very different from astrophysical sources such as merger of black holes. It is quite plausible that we will be completely convinced the source is indeed cosmic strings,” says Kazunori Kohri, Associate Professor at the High Energy Accelerator Research Organization Theory Center in Japan.

“It would be really exciting to learn why we exist at all,” says Murayama. “This is the ultimate question in science.”

The paper was published as an Editor’s Suggestion in Physical Review Letters online on 28 January, 2020.

Please refer to the press release for details.