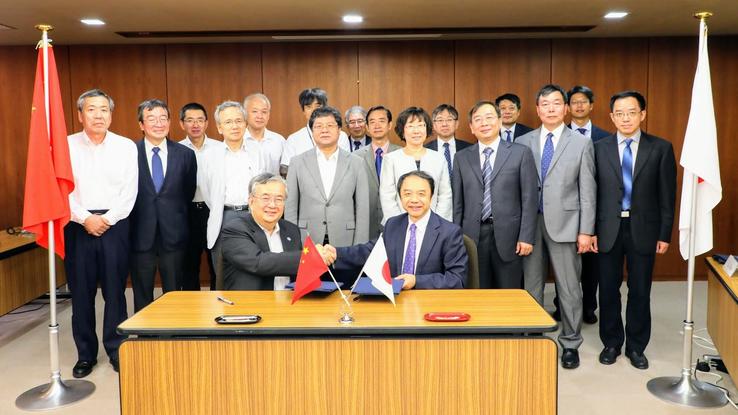 On September 7 and 8, ten delegation members led by Dr. Yifang WANG , Director of the Institute of High Energy Physics (IHEP), Chinese Academy of Sciences visited KEK Tsukuba campus to have a top-level collaboration meeting, which has a history of more than fifteen years. At the end of the meeting, both institutes signed a MoU for "R&D for high luminosity colliders ("MNPP-01 Project")" under the framework of Multinational Partnership Laboratory's Initiative.

IHEP is the biggest research institute in the field of particle physics in China, which promotes a variety of research projects such as Daya Bay Neutrino Experiment, the Beijing Electron-Positron Collider II (BEPCII), China Spallation Neutron Source (CSNS) and Beijing Advanced Photon Source (BAPS). Also at KEK, IHEP has been actively involved in BelleⅡ and COMET Experiments.

KEK has concluded several MoUs so far as part of KEK's Multi-national Partnership Laboratory Framework's activities to develop international cooperation aimed at fully effective utilization of state-of-the-art research facilities at KEK.
This MoU is designed to provide international collaborative scheme to R&D projects for high luminosity colliders, in particular, in an attempt to achieve the goal performance of Super-KEKB Accelerator. It states responsibilities of each participating institutes such as KEK, CERN, IN2P3, SLAC, INFN and IHEP. Among those, CERN, IN2P3 and IHEP have already signed the MoUs and the rest, INFN, SLAC are considering their participations.

At the meeting, Dr. Masanori Yamauchi, KEK Director General, told that competition has such synergy effects as to push forward projects on both sides, or enable double-checking of research results, considering the situation that China has proposed CEPC (Circular Electron Positron Collider) while Japan is considering possibility to host ILC (International Linear Collider).

Dr. Wang responded that competition and collaboration are important factors for science, through which technologies needed for the future projects like CEPC and ILC, and knowledge for fundamental physics can be obtained. Then, both institutes made progress reports on ongoing projects, based on the theme such as Material Science, Particle & Nuclear Physics and Accelerator. And they exchanged opinions on each future projects, including CEPC and ILC.

The next day, IHEP delegation took a lab tour to J-PARC in Tokai village.