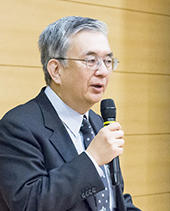 Best Wishes for the New Year.
I would like to express my gratitude for your tremendous support in 2016 and sincerest wishes that 2017 is a productive and prosperous year for you.

As we begin 2017, I would like to reflect upon the importance of basic science. Recently in successive years, Japanese scientists have been awarded the Nobel Prize for natural science. All these Nobel laureates, as well as many journalists and entrepreneurs, have underscored the significance of advancing basic science. Such concerns have grown with a sense of impending urgency, eventually forming a general trend last year. Basic research is especially important from the perspective that it is the starting point where "something" is created from "nothing". Although the continued economic doldrums throughout the world tend to promote research and development directly connected to producing immediate economic effects, we should never forget that today's technological innovations are rooted in the outcomes of basic research accumulated to date.

Humanity has an extremely limited knowledge about the laws and phenomena of nature or what is happening within organic cells. Hence, broadening and deepening such basic knowledge will surely give birth to wisdom that will enrich our economic activities and the lives in the next era. This assertion is crystal clear if we look back on the advances of science and technology in the past 100 years. The primary objective of basic science is to expand the latent abilities of humanity.

Unquestionably, particle accelerators have played a critical role in realizing dramatic progress of basic science. Since the 1930s, accelerators have been the engine to propel basic science forward not only in the areas of particle and nuclear studies but also by providing research methods indispensable for materials science and understanding life phenomena. In this regard, KEK -- High Energy Accelerator Research Organization -- has produced significant outcomes that have deepened the understanding of particles through collaborative studies by Japanese and foreign researchers as well as achieved cutting-edge results in materials and life sciences through studies using synchrotron radiation and high-intensity neutrons. Accelerators are making breakthroughs in several critical aspects and continue to play a vital role as a powerful engine expanding the frontiers of new basic sciences and applied research. To continue leading future science and technology, it is essential for Japan to not only maintain but advance accelerator technologies to accumulate the outcomes of basic science while simultaneously developing organizations and leaders that will connect such outcomes to technological innovations. We consider this to be the crucial role of KEK in the coming years.

In the New Year's Address last year, I mentioned that 2016 would be the first leap forward for KEK. Construction of the SuperKEKB accelerator is almost complete. In addition, the first-phase pilot operation was successful in the first part of 2016, and we are finishing the final preparations for full-fledged experiments. The Photon Factory (PF) has been operating normally, and significant outcomes in crystal structure analyses and other studies are consistently being published, while the successor of the existing PF is being studied. At the Tokai Campus, Hadron Hall continues its operation, enhancing the beam intensity and producing results in particle and nuclear studies. Similarly, the Neutrino Experimental Facility also continues to gather experimental data to elucidate the difference between neutrinos and their antiparticles. With equipment upgrades, the Materials and Life Science Experimental Facility (MLF) has further enhanced its performance and conducted experiments in materials and life sciences utilizing neutrons and muons. Turning to overseas research projects in which KEK is participating, the Large Hadron Collider (LHC) at the European Organization for Nuclear Research (CERN) continues its operations at higher energy levels and is accumulating data to elucidate newphysics beyond Standard Model . Although the International Linear Collider (ILC) project, which is highly anticipated in Japan and abroad, is still under consideration by the Japanese Government, the international group of researchers keenly continues its studies on necessary technology developments and further cost reductions.

Building on the successes of 2016, it is most important for KEK to take the second leap forward. We expect that new discoveries and a deeper understanding of the laws of physics and natural phenomena lie ahead. In addition, I believe we will continue to obtain groundbreaking results that will lead to epoch-making material and drug development.

We look forward to your continued understanding and support of KEK.