TiO2 is widely used as a heterogeneous support for metal catalysts, as a catalyst for decontamination, sterilization, and in solar cells. In addition, it is used as a standard material to test the catalytic processes of metal oxides that are important as catalytic or sensor materials. The knowledge of the structure of the surface where the catalytic processes occur is crucial for studying the fundaments of the reactivity and reaction mechanisms of solid catalysts.

To prepare the TiO2 samples for this study, the rutile-TiO2(110)-(1×1) surface, which is electrically conductive and thermodynamically the most stable phase of this material, was created under an ultra-high vacuum, and then converted to a (1×2) superstructure by heating to ~900 °C. A high-intensity positron beam was directed on this surface at a small glancing angle (θ = 0-6°) to obtain a diffraction pattern. Rocking curves were then obtained by plotting the intensity of the specular spot in the pattern against the glancing angle, followed by a calculation with the proposed structures so that the experimental results could be explained by any of them.

Finally, by removing the constraint that the two Ti-O tetrahedra should be symmetrically arranged on the outermost surface as in the Ti2O3 model (Fig. 1) proposed by Hiroshi Onishi and Yasuhiro Iwasawa (1994), we found that the optimized asymmetric Ti2O3 structure (Fig. 2) reproduces the experimental findings with great accuracy. This conclusion agrees well with the theoretical model optimized by Wang et al. (2014) by controlling both the atomic composition and atomic arrangement of the surface.

Utilizing the structure of this surface complicated with an up-and-down topology, studies are being performed to use it as a carrier of nanoparticles with catalytic activity. Although many models was proposed for this complex structure during the past 30 years, it was not certain on which model the further study should be based on. With the determination of the detailed atomic arrangement, it is expected that both basic and applied studies on the surface catalytic characteristics of this material will gain momentum. 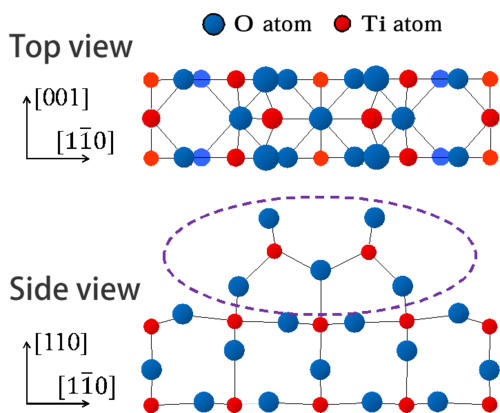 Fig. 1 Rutile-TiO2 (110)-(1×2) surface structure model proposed by Onishi and Iwasawa (1994) (Ti2O3 model). The Ti2O3 structure consists of two adjacent tetrahedral structures in which four O atoms surround a Ti atom, and is arranged at the same height on the TiO2 (110) surface, over the double period of the bulk structure. 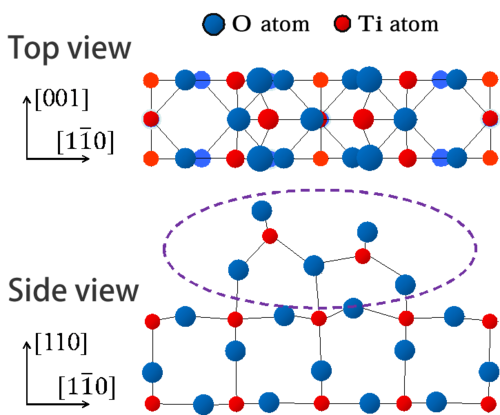 Fig. 2 Rutile-TiO2 (110)-(1×2) surface structure determined in this study (asymmetric Ti2O3 model). In the Ti2O3 unit arranged on the surface of TiO2, the heights of the right and left Ti atoms were freely changed for optimization. Wang et al. (2014), allowing for freedom in the composition and arrangement of atoms in their theoretical calculations, reached a most stable structure having a composition of Ti2O3 with an arrangement similar to our model.