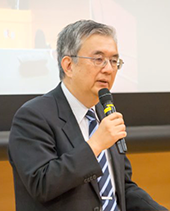 Thank you all for your tremendous support in 2015 and many wishes for a productive and fruitful new year.

At the start of 2016 I would like to consider the reasons why the research conducted at KEK must be at global forefront.

In the research of physics, especially fundamental physics, being the first to discover new, previously unknown phenomena or theories is accorded the highest value. Acquiring and broadly sharing new knowledge prompts new discoveries, progressively expanding the limits of our understanding. As knowledge broadens, fundamental laws of nature emerge. Humanity has furthered its understanding of the natural world in this way ever since the days of Aristotle. The supreme value placed on becoming the first to know the unknown can be considered a crucial driver of scientific progress. And this is true not only for fundamental physics; it has also shed light on the fundamental structures of proteins and myriad other substances and materials, and the mechanisms driving their chemical reactions, and spurred the development of materials and drugs with new functions. In other words, the value placed on new knowledge lies at the very foundation on which our modern scientific and technological civilization is built.

So, how does one come to know the unknown? Methodology varies widely by research field, but in the field of which KEK is a part, accelerators, which accomplish previously impossible feats in the demonstration of phenomena, play an indispensable role. In concrete terms, this means that KEK's contribution to science lies in the creation of accelerators with world-leading performance, delivering higher levels of energy or intensity than ever before to reveal as-yet-unknown universal natural laws.

Looking back, the year 2015 could be described as a charging period for KEK. At the Tsukuba Campus, synchrotron radiation experiments moved forward while the construction of the SuperKEKB accelerator entered its final phase. At the Tokai Campus, the operation of the Hadron Hall, which had been shut down for an extended period, resumed and began gathering data together with the Neutrino Experimental Facility. The Materials and Life Science Experimental Facility (MLF) conducted its own experiments in materials and life sciences but was forced to suspend operations in the second half of the year due to an equipment malfunction. Turning to research projects in which KEK is participating, the construction of the phase one experimental facility for the KAGRA (Large-scale Cryogenic Gravitational Wave Telescope) project, carried out in conjunction with the Univesity of Tokyo's Institute for Cosmic Ray Research and the National Astronomical Observatory of Japan, nearly reached completion, while, overseas, the Large Hadron Collider (LHC) at the European Organization for Nuclear Research (CERN) continued operating at higher energy levels and collecting data in the exploration of new phenomena.

Thus, in constrast with 2015, which was a year of gathering strength and data for future progress, 2016 will witness the launch of the SuperKEKB's pilot operation and an official start toward new objectives. The Photon Factory (PF) will no doubt continue to turn out new analytical results on material structures, while the MLF will undergo performance upgrades using improved equipment. The LHC might unveil discoveries of new physical phenomena. And the Neutrino Experimental Facility and the Hadron Hall will likely announce new findings using their accumulated data. Meanwhile we are also looking to future accelerator projects, the proposals for which I am sure I will have the opportunity to present going forward. At the start of this year we have already released the KEK-ILC Action Plan, which outlines the steps KEK will take given a green light from the Japanese government on the International Linear Collider (ILC) project currently under consideration by the Ministry of Education, Culture, Sports, Science and Technology as proposed by international organization of researchers.

For these reasons, I believe 2016 will be the first step toward many great things to come for KEK. We look forward to your continued understanding and support.