Almost all physical phenomena are the same for particles and their anti-particle partners - a property referred to as 'CP-symmetry'. CP violation occurs when this symmetry is broken so that nature behaves differently for particles and their anti-particle partners. CP violation has been observed in a small number of rare decays and a new case of CP violation has been reported in a first-ever joint data analysis with BaBar and Belle data. This joint analysis reveals the observation of CP violation in the two-body neutral B meson decays to neutral D meson and a light neutral meson for the first time. This analysis is the first attempt to utilize the data accumulated by two B-factories, BaBar and Belle experiments in a combined analysis that have, in the past, carried out independent measurements of CP violation in various B meson decays. To our knowledge, this is the first time competing particle physics experiments at different accelerators have combined their data in a single analysis prior to publication.

Background of this research

Since 1999, the two B-factory experiments, BaBar at SLAC National Accelerator Laboratory and Belle at High Energy Accelerator Research Organization (KEK) have performed measurements of CP violation in various B meson decay modes. So far, these data analyses have been done in an independent manner and the results have been compared only after independent publication. The achievements by the two experiments have validated the Kobayashi-Maskawa theory as the proper description of CP violation in the quark sector. BaBar and Belle completed data acquisition in 2008 and 2010, respectively. Since then, the search for the New Physics (NP) effects beyond the Standard Model (SM) in CP violation phenomena has continued using progressively more rare processes in both data sets. To find NP contributions in very rare phenomena, it has now been demonstrated that it is possible to perform a joint data analysis using BaBar and Belle data.

CP violation in certain two-body decays of the B meson

The two-body B decay to a neutral D meson and a light neutral meson (π0, η or ω) is governed predominantly by the SM and is thus very suitable for CP violation measurements in the cases where the neutral D meson is reconstructed in the K+K−, KS π0 or KS ω modes. However, because of the low branching fraction, each experiment alone lacked enough statistical sensitivity to confirm CP violation in this B decay process. Now, for the first time, the analysis has been performed jointly using BaBar and Belle data. This analysis proved to be quite effective to overcome the limited statistics so that, for the first time, CP violation in this B decay mode has been observed with a statistical significance of 5.4 σ. The hypothesis of CP conservation is ruled out with the probability of less than half ppm. The absolute value of the CP asymmetry is found to be consistent with the earlier independent measurements using the neutral B meson decays to a charmonium and a neutral kaon. Thus, the result obtained here provides an additional new SM reference.

The study of other rare processes as probes of NP contribution in CP violation phenomena will benefit from the lessons learned in this pioneering study. We look forward to more such joint analyses from BaBar and Belle. 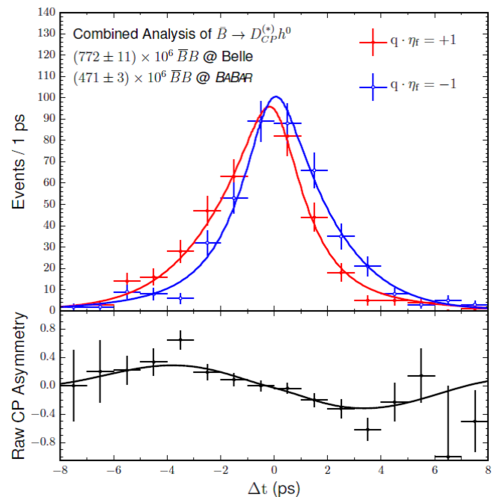 Figure: Evidence of CP violation obtained by combining data from 471 million B meson pair events recorded by BaBar with 772 million events from Belle. The horizontal axis is the difference between the decay times of the B meson and anti-B meson pair produced in an electron-positron collision event and the vertical axis is the number of events of a particular type of decay. The blue points are measurements of the number of B meson decays to a neutral D meson and a light neutral meson whereas the red points representing the number of such decays from anti-B mesons. The curves are fits to the data. The difference between the red and blue data and curves, shown in the bottom plot, is 5.4σ (more than five times the standard deviation) from zero. This clearly shows that CP is violated in this type of decay.