Dr. Stefan Moebs, the Minister Counselor, and Dr. Andreas Kirchner, the Science Counselor, from the German Embassy to Japan in Tokyo visited the KEK high energy physics laboratory on Wednesday, June 24th, 2015 and met with Director General (D.G.) Prof. Masanori Yamauchi and German researchers working on the Belle II experiment. After a greeting from the D.G., Executive Director Prof. Yasuhiro Okada gave an overview of KEK. Prof. Christian Kiesling of the Max Planck Institute for Physics in Munich then gave the German ministers an introduction to particle physics and the Belle II experiment at KEK.

Professors Kiesling, Sfienti, Kuehn, Lange and Kuhr, and Doctors Moser, Heck, and Niebuhr took the German ministers on a tour of the Belle II detector and the SuperKEKB particle accelerator. Prof. Kiesling and Dr. Moser explained the critical German contribution to Belle II, namely the pixel vertex detector, which will be mounted on the beampipe. The SuperKEKB accelerator tour was guided by KEK Prof. Takaaki Furuya. Prof. Kuhr and Dr. Heck discussed the German role in the software and international GRID-based computing for Belle II.

After the tour a luncheon meeting was held with German researchers. They discussed the international character of the Belle II experiment, which is truely an international collaboration and not a user facility in contrast to most other scientific experiments and facilities in Japan. In addition, the impact of high energy physics resesarch on society including technological and computing spin-offs were discussed.

Prof. Kiesling says, "The visit by Dr. Moebs and Dr. Kirchner from the German Embassy in Tokyo and the resulting discussions were conducted in a very positive and supportive spirit. The visitors acknowledged the great enthusiasm and dedication of the German groups to the Belle II experiment. They were also informed about the excellent collaboration of the German groups with their Japanese hosts as well as with the other international collaborators. We were happy to learn that the the German contribution to Belle II is the largest scientific project of the German ministry of science and technology in Japan. We were assured that the German Embassy will do their best to help the German groups to carry out their experiments at KEK in an efficient and timely manner. We received a number of helpful suggestions to support the German-Japanese collaboration in an even better way." 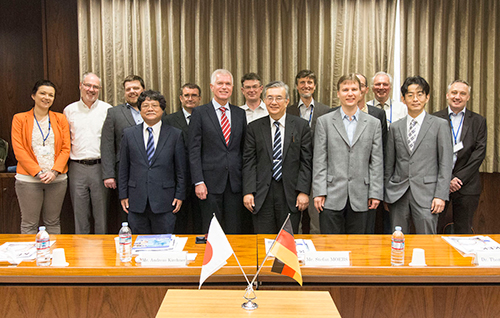