Brief description of the research

A research group from the High Energy Accelerator Research Organization (KEK), RIKEN, and TRIUMF have succeeded in developing technology for the production of large numbers of muonium (Mu) atoms※1 diffused into a vacuum at room temperature.

Muonium is a bound state of a positive muon※2 --an anti-particle--and an electron with the electromagnetic force, and is similar to a hydrogen atom, which is the bound state of a proton and an electron. Once Mu can be produced in an almost stationary state at room temperature, we can create a novel source of muons with extremely low energy by stripping electrons off the Mu states and then accelerating those "ultra-slow muons". Such a muon beam would provide an opportunity for performing ultra-precision measurements of the fundamental properties, namely the anomalous magnetic moment (g-2)※3 and electric dipole moment (EDM)※4, of elementary particles (Fig. 1). In addition, particles from such a beam could be stopped in the material at a targeted spot with high precision, and hence could become an important probe for investigating magnetic properties inside the materials by utilizing muon's magnetic sensitivity. (muon microscope※5 )

The researchers hope to achieve ultra-precision measurement of the muon g-2 with the novel technique, especially because the last experimental data deviated from the standard model of particle physics by three standard deviations, triggering many works based on new interpretations of physics. In addition, the EDM measurement is attracting interest because a non-zero measurement would immediately mean a violation of time-reversal symmetry※6, indicating a violation of CP symmetry (particle-anti-particle symmetry) through the CPT theorem, beyond the level of Kobayashi-Maskawa theory which was proven by the Belle experiment at KEK.
However, a major concern was cast on the proposed g-2/EDM measurements, because the intensity of such an ultra-cold muon beam was considered to be limited due to the very complicated process i.e. having to strip an electron from the bound state Mu.

The team developed technology to drill many holes into a stably made silica-aerogel enabling the Mu yield to be enhanced by a factor of 10 over existing technology.

Thanks to this improvement, large-yield production of Mu became possible, and consequently the beam intensity of the ultra-cold muon beam is approaching the level required for the precision measurement of muon g-2 and EDM which is currently planned at J-PARC. Such precision measurements could serve as a stringent test of the standard model of particle physics, thus paving the way to the discovery of new physics law beyond the standard model. In addition, it is expected to advance material and life science through the development of muon microscope technology.

This work was accepted for publication by Progress of Theoretical and Experimental Physics, and published on September 12, 2014 (JST).

The standard model of particle physics can explain almost all physics phenomena of elementary particles with very few exceptions. However, we start to see cracks in the standard model with increasing precision of experimental results. Any crack in the standard model has the potential to be the signature of new particles or interactions, and furthermore could be a key to unravelling the mysteries of modern physics, namely the questions of the dominance of matter over anti-matter or the nature of dark matter. Therefore, stringent tests of the standard model attract a great deal of attention.

The muon has a physical characteristic called spin, which is analogous to the rotation of the Earth. The muon spin rotates (or precesses) under the influence of magnetic fields with its rotation axis along the magnetic field. The constant representing this precession is the gyromagnetic ratio "g". Its deviation from the obvious value "2" is called the "anomalous magnetic moment" (g-2). The anomalous magnetic moment can be calculated from the standard model with ultra-precision and it could show the possible effects of new laws of physics. Therefore, physicists expect that precise measurements of the anomalous magnetic moment could lead to the discovery of "new physics" beyond the standard model.

The anomalous magnetic moment of the muon was measured by an experimental group at Brookhaven National Laboratory of the United States, E821 with the best precision ever-reached. They reported a small but significant deviation from the standard model. The deviation is so tiny that the measurement had to be done with ultra-precision. However, there are no other experiments that were able to reach that level of precision at this point.

The experimental method of E821 requires storing the muon beam with a specific momentum. This specific momentum, the "magic momentum" is required so as to cancel the effects of the electric focusing field, which was irreducible in order to store the muons, which are inherently widespread in momentum. Instead, our method, which employs the muonium production at room temperature, could produce muon beam with extremely narrow momentum spread. As a result, we are able to eliminate the electric focusing field, consequently releasing the condition of "magic momentum" so that we can just concentrate on the ultra-precision. Now we have chosen a much smaller momentum where experimental conditions can be more precisely controlled, serving as a complementary method to that of E821.

In addition, the same data sample set could serve for the precise determination of the electric dipole moment (EDM) of the muon. If the EDM is measured to be non-zero, it immediately means that time-reversal symmetry is broken, which consequently implies a violation of CP symmetry (particle-anti-particle symmetry) under the CPT theorem. Such a completely new CP violation could be the key to elucidating the origin of our universe with matter dominance over anti-matter. Therefore, the precision measurement of the EDM is also considered extremely important.

In this research, a brand new method to produce thermal muonium at room temperature in vacuum was established.

The research group first conducted an experiment to measure the rate of muonium production from silica aerogel without any processing on its surface. The measurement determined the length of muonium diffusion in silica aerogel. The group postulated that the probability of muonium diffusing out to the vacuum could be increased if holes were introduced on the silica aerogel's surface with size and pitch on the same order as the length of diffusion. After several ways to generate holes on the fragile surface of silica aerogel were tested, the method using the laser-ablation technique proposed and fabricated by Yu Oishi (RIKEN) turned out to be the best (Fig. 2).

As a result, the new measurement at TRIUMF concluded that the production rate of muonium increased by about an order of magnitude with laser-ablated holes on silica aerogel (Fig. 3). This result implies that the measurement of g-2 and EDM at J-PARC with the brand new technique could reach a sensitivity good enough to test the BNL E821 results.

Up to now, Tungsten foil heated up to about 2000 degrees was used as a source of muonium first at KEK-MSL and then at the RIKEN-RAL muon facility. The larger beam spread due to the higher temperature has been a concern since it limits the sensitivity of g-2 and EDM measurements. Therefore, the efficient production of muonium at room temperature as high as or better than Tungsten foil is a major achievement.

Impact and expectations of this achievement

The method of g-2 and EDM measurements with ultra-slow muons makes it possible to test the tantalizing deviation of muon's g-2 from the standard model and non-zero EDM by a completely novel experimental technique. The achievement of efficient production of muonium is a major milestone in realizing the experiment. Further improvements will be studied by optimizing the patterns of the laser-ablated holes such as diameter and/or pitch. This work will also contribute to improved performance of the muon microscope that is currently under development at J-PARC. In such an application, the brightness of the muon beam at focus would become more than 10 times higher by a simple estimation. This work could enlarge research fields on material structure, surface and interfaces in material and life science.

1) Muonium:
Muonium: A bound state of an electron and a positive muon. Muonium is analogous to a hydrogen atom with its proton replaced with a muon. Muonium is used in the process of generating ultra-slow muons.

2) Muon:
Muon: One of the elementary particles in the standard model of particle physics. A second-generation leptonic particle.

3) Anomalous magnetic moment (g-2):
Magnetic moment is a basic property of elementary particles with spin, expressed by a product of the Bohr magneton and a "g" factor. The g factor is equal to two when virtual photons in quantum loop are not included. It deviates from two due to the quantum loop effect of virtual photons. The deviation of the g factor from two is called the anomalous magnetic moment. Particles and/or interactions beyond the standard model would also contribute to g-2.

4) Electric dipole moment (EDM):
A quantity for expressing the polarization of electric charge distribution introduced by a pair of equal electric charge with opposite signs separated by a distance. The EDM of an elementary particle violates the symmetries of time-reversal (T) and spatial inversion (P). EDM is expected to be suited to a search for the yet un-discovered origin of CP violation as the T violation is translated to CP violation under the CPT theorem. The standard model of particle physics predicts an extraordinarily small EDM. No non-zero EDM signal has been found in any of the elementary particles yet.

5) Muon microscope:
A microscope with a muon beam as a scanning probe. It would have a unique sensitivity for acquiring images of magnetic property of material. Construction of a muon microscope is underway at the Material and Life science Facility, J-PARC. Large areas of applications to material structure, surface, and interface are foreseen.

Figure 1: Concept of the precision measurement of g-2/EDM at J-PARC 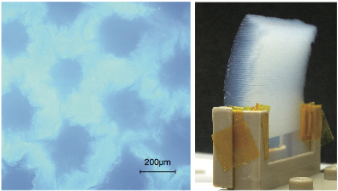 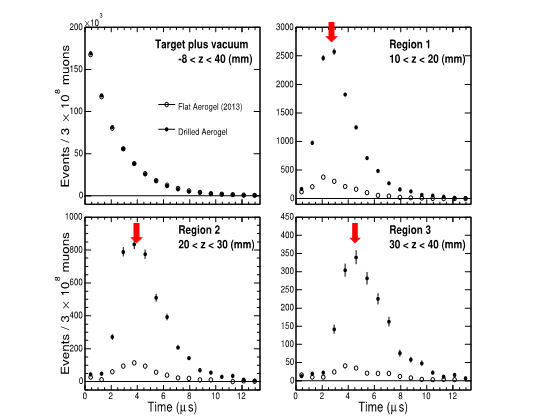 Figure 3: Time distributions of positrons emitted from muonium decay for four regions categorized by a distance from the sample surface. The closed and open circles show data with and without laser-ablated holes, respectively. The number of positrons, which is proportional to the number of muonium atoms, is significantly increased for the sample with laser-ablated holes in the regions away from the sample surface (region 1, 2, and 3).