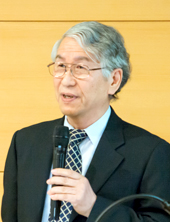 As this is my last term to be the DG, I would like to look back the past 9 years since I became the KEK DG in 2006, instead of talking about the plans for the future.

FY2006, started with talking to many people in KEK to understand the situation we were in. Then I came up with the Road Map for KEK which contains 4 major projects: (1) Starting experiments at J-PARC; (2) Grade up the e+/e- collider, KEKB; (3) Produce a Compact ERL as the accelerator for operational test of ERL; (4) Push for technical advancement for the International Linear Collider, ILC, which was reviewed by the International Reviewing Committee in March 2008.

In 2008, Italian future project, SuperB made me think how to proceed our project, the Super-KEKB as they are similar to each other. I thought it would be difficult to combine the two projects into one. 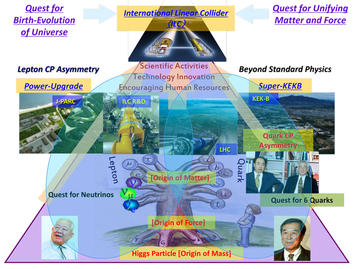 Roadmap for Particle and Nuclear Studies 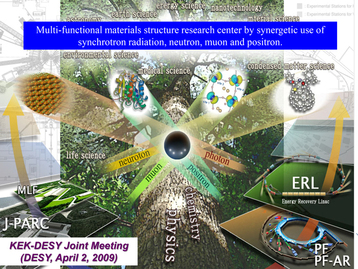 I recalled an anti-Darwinian evolution process where a species attained overwhelming power over the others at the end had started with a tiny little advantage at the early stage. This evolution scheme is often found in a business world. For instance, a business with only a little bit higher market share eventually took over the market, as represented by the videotape formats; Beta and VHS.

I put efforts to get budget support as early as possible to follow the latter example. Fortunately, we received budget by the summer of 2010, resulted a rapid rise of the number of participating researchers from outside of Japan. Now, only the Super-KEKB project is surviving.

Professors Nambu, Kobayashi and Maskawa
The year 2008 was a cerebrated year: The LHC construction was completed at CERN, Geneva, Nobel prizes for Professors Yoichiro Nambu, Toshihide Maskawa and Makoto Kobayashi and the starting of J-PARC beam.

In 2009 I was a chairperson for ICFA between2009 and 2011 so that I had to think more about outside of Japan. CERN announced its plan to further expand its role, but I insisted the multiplicity of research is important and single source for research reduces diversity in research. This resulted the foundation of Joint Asia Accelerator Workshop (JAAWS) that developed into Asian Forum for Accelerator and Detector (AFAD). We will have the 5th workshop in Taiwan this year 2015.
Dr. Ada Jonath who did 10 years of research at KEK Photon Factory received a Nobel Prize.

Japanese government was hard at cutting budget this year and we recognized the importance to get the general public to understand our activities. We started "KEK Caravan" an out reach effort to provide lecturers to schools. The lectures are now to 50 organizations per year. The requests from elementary schools are increasing recently which we appreciate very much.

In 2011, the huge earthquake of March fortunately did not result casualties in KEK, but it had resulted damages to many equipments and facilities. This along with the rationing of electric power forced us to stop all accelerators. We were very encouraged by the helps and supports from the government and from overseas and we worked very hard to recover from the damage. We followed the recovery plan we made when we had severe black outs and recovered one part after another, such as injector, Photon Factory, J-PARC and so forth. We are proud of the fact that we had succeeded to restart experiments as in the recovery plan.

In December 2012, the International Linear Collider's Technical Design Report was completed as the result of 9 years of work by the international working group, ILC Global Design Effort, GDE. So we were entering the preparation stage for the construction.

In 2013, revised version of KEK Road Map was produced covering the years between 2014 and 2018. It made KEK recognized as an international accelerator research centre and the only one laboratory offering many kinds of particle beams, such as electron, positron, synchrotron radiation, neutron, muon, kaon and neutrino, for wide varieties of research fields.
Nobel prizes for physics this year went to Dr. François Englert, and Dr. Peter W. Higgs for their theoretical prediction of the Higgs boson for which LHC discovered one year before.

In elementary particle physics field, the concept, symmetry breaking appears often. Now, what is this? Does it mean that a perfect symmetry manifests and the symmetry is broken by something? Or, is it that there is no perfect symmetry in the world so that the world is only approximately symmetric?
It is a puzzle. In any case, the hint is in the "vacuum" in which the symmetry break down occurs. I hope the discovery of the Higgs boson will provide an "window" through which we could search the truth in the "vacuum".

The radiation accident of May 2013 at the J-PARC Hadron Facility that caused leakage of radioactive substances and radiation exposure to workers have caused lots of troubles and worries to many people outside of the J-PARC. Every one of us has been doing our best to regain the trust of the public and we shall refresh our determination for it every year, never to forget. 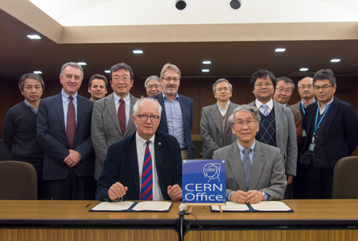 Signing ceremony at KEK for new international offices of KEK and CERN In 2014, the next generation synchrotron radiation source test model, the Compact ERL, was built and the Roadmap we set in 2008 was basically realized. In November, the CERN-KEK Office was founded along the "Multi-nation Laboratory Project" concept collaborating with CERN, the Japan-Europe Laboratory. I hope this will become the Multinational Laboratory in the future.

The year 2015 is the year of sheep. We hope to have the mental leeway as sheep seems to have and would like to challenge for new life like after the sheep shearing, and have the teamwork of sheep.