In 2007, one year before the awarding of the Nobel Prize to Profs. Kobayashi and Maskawa, the Belle collaboration at <span class="caps"><span class="caps">KEK reportedthe observation of the first electrically charged 4-quark state, the Z(4430), at the XXIII International Symposium on Lepton and Photon Interactions at High Energy, and then published this result in Physical Review Letters 100, 142001 (2008)

The Z(4430), on the other hand, clearly contains the charm and anti-charm quarks and is electrically charged - as determined by Belle's original observation of its decay to the ψ(2S) π+ state - so it is unequivocally a four-quark combination of charm, anti-charm, up, and anti-down. Later, in 2013, Belle published a new and stronger paper on the existence as well as the determination of the spin, parity and charge-conjugation quantum numbers of the Z(4430) in Physical Review D 88, 074026. Meanwhile, Belle has discovered a cornucopia of similar exotic charmonium-like and bottomonium-like states within its copious data set, including the charged four-quark combinations of bottom, anti-bottom, up, and anti-down that was published in Physical Review Letters 112, 068103 (2013). 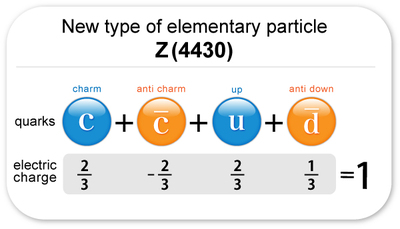 Four-quark states are considered exotic because they do not follow the pattern of the known baryons (three-quark combinations) or mesons (quark-antiquark combinations). As such, they provide phenomenologists with additional ammunition to explore the detailed nature of quantum chromodynamics (QCD), the part of the Standard Model of particle physics that describes the interactions among quarks and that encompasses the possibility of four-, five- and even six-quark states. This more detailed understanding of the behavior of <span class="caps"><span class="caps">QCD may even have astrophysical implications extending to speculation about how the quarks in neutron stars are arranged.